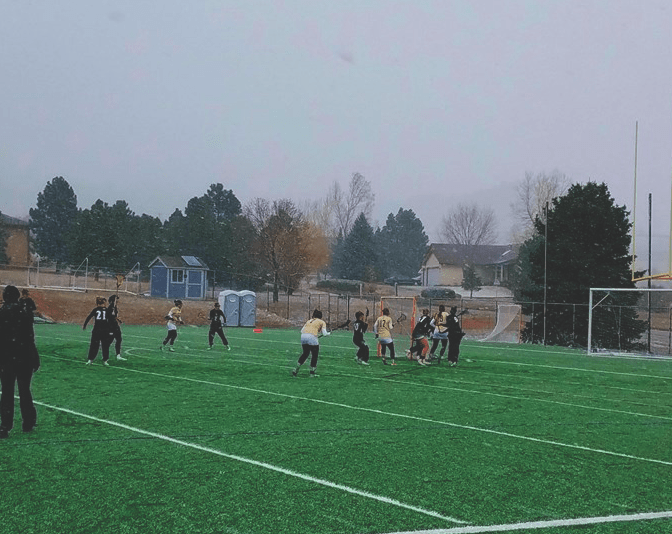 With just one regular season game left to go, the 2018 women’s lacrosse season is coming to an end.

However, the team has almost doubled their overall record from last year, after they finished 4-10 in their inaugural season. The team will look to improve this record further going into their third season, which starts in February 2019, according to Christine Hatton, head coach of the women’s lacrosse team.

“The team is much more focused, athletic, and experienced as compared to our inaugural team,” Hatton said in an email.

“We are much more prepared mentally and physically. We have focused a lot of time on team dynamics on and off the field.”

“ Leadership from upperclassmen on the team has made a difference for the younger players,” said Hatton. Senior defender Carmen Plowman and junior defender Ellie O’Brien were voted in as captains at the beginning of the year. According to Hatton, Plowman and O’Brien have set a good example for their younger teammates to follow.

Plowman, a math major, felt that she needed to be a good example for the team as they shifted responsibilities. Being a young team has given the players the opportunity to show their potential, according to Plowman.

“We’re full of potential and a lot of teams underestimate us. Showing up ready to play has helped us get us our first conference wins against teams who beat us last season and expected to beat us again (this year),” she said in an email.

Development has been a key aspect of the team’s strategy as they head into the 2019 season.

“Being a young team means we have time to develop each athlete individually. This team will grow together and build on successes from the previous year,” said Hatton.

“We have a lot of potential and with the new recruits coming in each year, we are going to surprise people in the coming years.”

However, the team has faced disadvantages when it comes to their inexperience, according to Plowman.

“We had several games come down to one point this season and knowing how to handle that pressure comes with experience that we don’t have yet. It’s only a matter of time before we have it though, and that’s why our potential is so huge,” she said.

As she looks ahead to graduation, Plowman wants these last few games to be remembered fondly.

“The end of a season is always hard, especially when the team gets along as well as ours does,” she said.

Hatton said that they are striving to finish the season with a win. “CSU-Pueblo is our biggest rival, and it should be a very competitive game. We are prepared and excited for the last challenge of the season,” she said.

The Mountain Lions’ final game is on, April 27 at CSUP Rawlings Soccer Complex in Pueblo. For more information on the women’s lacrosse team go to gomountainlions.com.