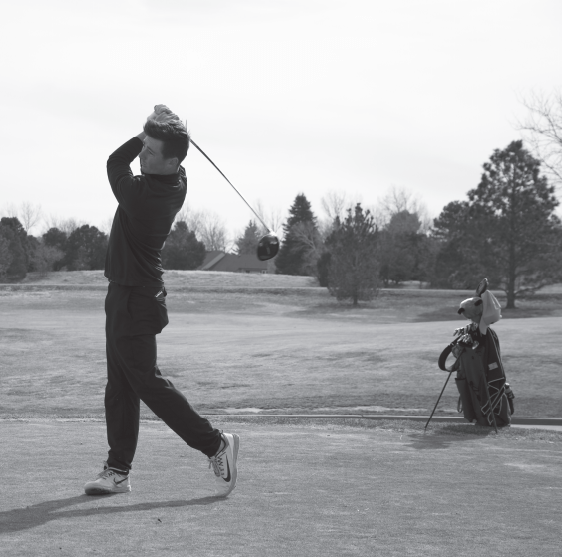 By: Alex Dant
In: Sports & Recreation

Despite setbacks with weather and a slow start to the spring season, UCCS men’s golf Head Coach Phil Trujillo plans is to start practicing to be more competitive in the next few weeks as the Rocky Mountain Athletic Conference (RMAC) championship tournament, as well as the regional tournament, rapidly approaches.

With the first half of the golf season in the fall semester, Trujillo said it was difficult to stay competitive with weather impacting practice times. He said it was “difficult to come out of the gate playing the way we’d like to play.” He went on to say that challenges with the weather have affected most teams within the region, not just the Mountain Lions.

There have been six tournaments this season, with UCCS finishing in the bottom half of the field in each one.

While the team has gotten off to a rough start, they have been steadily improving their game over the past few tournaments, most recently taking placing No. 6 in the Tim Tierney Pioneer Shootout on March 19 in California, despite facing an unfamiliar course. The team has also experienced notable victories against high ranking teams that will be competing in the RMAC tournament as well as the regional tournament.

Trujillo said this comparative success will start the process of building up the momentum required to make it past the RMAC championships and regionals.

Trujillo’s strategy to qualify at regionals involves more competitive practices and staging more one-on-one between teammates. He said that as the next few weeks come, the team will need to start bringing more intensity to practice and helping the weaker players get up to the level they need to be at to carry the team.

“We need to be at our best,” Trujillo said.

The golf team will also be focusing more on matches against teams competing within their region. The region includes schools from Colorado, Utah, Texas, Oklahoma, and New Mexico. To advance in regionals, Trujillo said, it’s important to focus on the teams that the Mountain Lions will be seeing in the final tournament.

The next tournament they compete in will be the Mustang Intercollegiate tournament in Goodyear, AZ. This will be the final tournament before the RMAC Championship, and the last opportunity for the team to hone their skills in the face of competition. The competition will happen next Monday and Tuesday, April 8 and 9.

As the season finishes, Trujillo said some of the season’s best performers include Ignacio de la Vega, a sophomore, Clay McCrory, a junior, and Jack Duguid, a senior. In the Tim Tierney Pioneer shootout, Duguid and McCrory tied for No. 14 overall, with 219 points each. De la Vega also found success at Tim Tierney,  placing No. 47 overall, only eight points behind McCrory and Duguid.