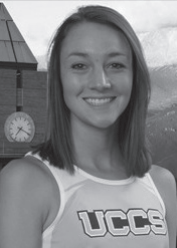 Some people might de-stress by going to Pause for Paws in the library before finals week, but for distance runner Kayla Wooten, the best way to unwind is to go for a run. Wooten, a freshman business major, recently won multiple awards, including Athlete of the Year and Rookie of the Year, at the CU Sports Performers of the Year Conference.

Wooten’s performance in several conferences has proven her recipient status of these accolades; she came in sixth in the mile with a time of 4:47.12 in the NCAA NCAA Division II Indoor Track and Field Championships in March.

Wooten is one of the fastest runners in the 1500 meter in Division II; she ran the second fastest time as a freshman in her division and came in 11th at the Long Beach Invitational, allowing her to move up to compete in the NCAA Division II National Championship.

Wooten lives by advice that her former high school track coach provided her.

“Believe in yourself even through those times where you feel like you are struggling.”

While in high school, Wooten, who is originally from Oswego, Ill., was never in the front of the races.

Wooten’s goal was to play volleyball in college but was drawn to running track. In her sophomore year of high school, her track coach encouraged her to continue her pursuit of the sport.

“I was playing volleyball my freshman year of high school, and the only reason I was running track was to stay in shape for volleyball,” she said.

“When I started doing the distance track stuff, the coach was like, ‘you need to run cross country.”

At that moment, she realized that she did make the right decision.

“I would tell incoming freshman or any other runners to believe in themselves. Your mindset will determine your season, which is why staying positive and being confident in yourself is so important,” said Wooten.

“Some days you will feel terrible, and other days, you will feel like you are on top of the world. It’s all a part of the process. Doing the little things every day to make yourself better will make a huge difference.”