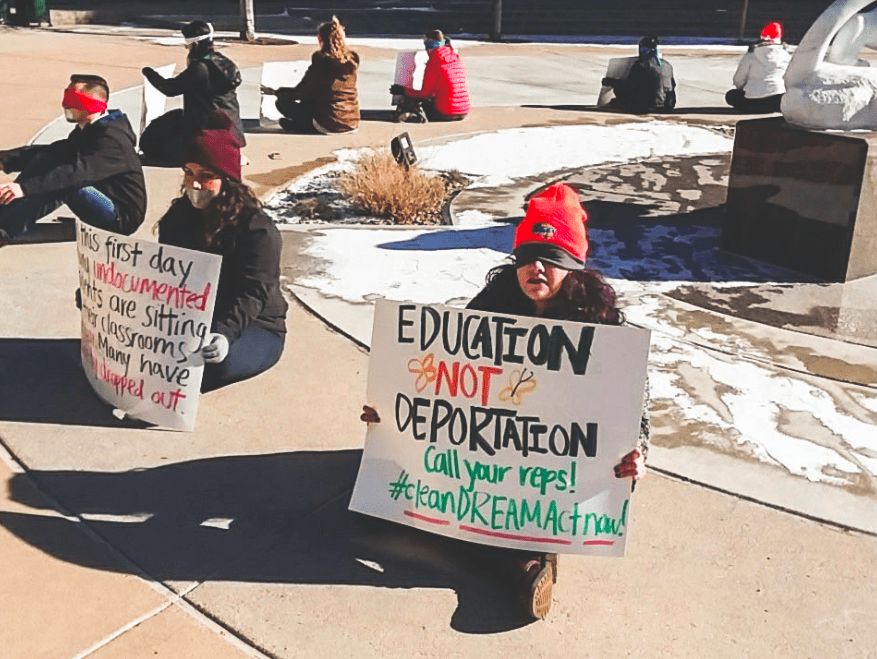 UNIDOS’ first meeting of the fall 2017 semester was interrupted by a surprise visit from campus police. An anonymous source reported club members under the Deferred Action for Childhood Arrivals program to authorities and demanded that they needed to be deported.

“Campus police came to our meeting to warn us about the call. I don’t understand how anybody could do something like that,” said Nayda Benitez, president of UNIDOS, or United Immigrants Dedicated to Opportunity & Success, a club dedicated to helping undocumented immigrant students.

The incident was the first backlash the students, who are known as Dreamers, received after DACA was rescinded earlier that week on Sept. 5, 2017.

DACA was enacted by the Department of Homeland Security in 2012 during Barack Obama’s presidency. The program allows for undocumented immigrants who arrived in the U.S. as minors to receive a two-year period of deferred deportation, apply for work permits and attend universities.

As of Sept. 5, the United States government stated it would no longer accept new DACA applicants or renewals. When a DACA student’s permit expires, they are no longer eligible to work or attend school in the United States. The program is set to expire March 5, 2018.

UNIDOS considers the phone call made to campus police to be a threat. They are now extra cautious at their meetings.

“We don’t feel safe. Every time the door opens, we look over our shoulders not knowing who coming to our meeting and why,” said Benitez.

The university has no official records of who the DACA students are on campus, according to Shannon Cable, director of Student Employment.

On paper, the students are considered to be the same as international students, which is why there are no official records. Administration does not know exactly how many DACA students are currently studying at UCCS.

A U.S. District judge in California put a temporary halt on the DACA rescission on Jan. 9, forcing the government renew the work permits of DACA recipients as a lawsuit against ending DACA moves through the courts.

Under the ruling, applications for new DACA recipients will continue to not be accepted. The Department of Justice has announced that they will fight the injunction.

Senior business major Kayla Castellanos’ DACA permit is set to expire in a couple of weeks. The rescission of DACA occurred before Castellanos was able to apply for a renewal, but she chose to apply anyway.

“My parents didn’t want me to sign up for DACA. They thought it was a trap. I told them that they were wrong, that we are now wanted here. When this happened, I thought, ‘Oh no, they were right,’” she said.

Castellanos has received word that her application is being processed. She hopes that the ruling stands.

“I love my job. I’ve been promoted to manager. I don’t know what I am going to do if my renewal doesn’t come through,” said Castellanos. “I’m going to be graduating soon. I don’t want all of my hard work to go to waste.”

UNIDOS held a silent protest in the El Pomar Plaza for Dreamers on Jan. 16. Participants wore blindfolds and duct tape over their mouths, holding posters that said, “Hate cannot drive out hate Only love can do that #cleanDREAMActnow!”

According to Benitez, UNIDOS wanted to host the protest on campus because there are students who are impacted by the policy.

“The future of DACA is still unstable, and it is unfair that they are playing with our lives in political chess. We are not chess pieces; we are humans,” said Benitez.

“On our first day of school, we wanted to remind people that some students are sitting in their lectures and their classrooms in anxiety and fear and worry of what will become of their futures.”

Castellanos said that the protest spoke to how she felt about DACA’s uncertainty. She wanted to be part of the protest to spread awareness about Dreamers.

“I feel like I have no future right now. That’s what the blindfold represented, that I can’t see my future. The tape represented that I have no voice because I’m not a citizen,” she said. “I don’t have the same rights, and I can’t get my message across the same way that a citizen could.”

The undocumented students have been advocating for themselves. A group of seven UCCS students traveled to Washington D.C. to speak with government officials in December.

“I was told all of my life not to speak up, not to stand out. We always had to hide in the shadows,” said Castellanos. “Even now, it’s a risk to identify myself as a DACA student. You never know how someone will react.”

“I have to think about whether or not I want to share my experience in class. In the past, people have discounted my opinion because they think that I am biased,” said Benitez.

CU system leaders established the Student Relief Fund to assist students affected by the DACA ruling. Reddy and other campus officials donated to the fund because many DACA students are not eligible for financial aid.

Over $1,000 dollars was raised for the fund during a fundraiser November 2017. Undocumented students can apply for assistance from the fund.

At CU Boulder, DACA students have access to both a student relief fund and a separate institutional scholarship, whereas UCCS does not.

“With (CU Boulder) specifically, not only do they have a student relief fund, they also have an institutional scholarship that is separate. It is specifically for their undocumented students,” explained Benitez.

According to Jevita Rogers, senior executive director of Financial Aid and Student Employment, scholarships start with a donor.

“When it comes to the university itself, because we are a state public institution, we are unable to provide any of our funds for DACA students, just like we can’t provide it for international students because our money is coming from the state,” said Rogers.

“We have to adhere to state laws. We are a much younger campus than Denver or Boulder, so we don’t necessarily have as much in endowments and outside scholarships.”

As for Student Employment, the impact that DACA has had on student employees are unclear, according to the UCCS Financial Aid website. DACA students are given an Employment Authorization Document, which allows them to legally work in the U.S.

Rogers encourages students to reach out to her if they feel unsupported.

“If there are concerns, or feelings of students not being supported, it is definitely something to reach out to myself or anyone else in the university. We are limited in some things that we can do for students but it doesn’t mean we wouldn’t try,” said Rogers.

“Their voices need to be heard”

After the rescission of DACA was announced, Chancellor Reddy published a letter of support for DACA students on Sept. 7.

The letter detailed ways that UCCS would offer support, including a graduate student point of contact in MOSAIC, supporting UNIDOS’ efforts, creating an informational webpage and launching the Student Relief Fund.

“Our responsibility as a university, is to affirm that all of our students, regardless of immigration status, be accorded the opportunity to succeed as students in a supportive and inclusive educational environment,” said Reddy.

MOSAIC hired Benitez to assist undocumented students learning how to navigate the college system, including how to fill out the FAFSA form.

But according to Benitez and Castellanos, the UCCS administration has not been as supportive as they wish they were due to a lack of scholarship funding.

“I believe that their administration and their departments are being more supportive in helping to fundraise, whereas here it was put back on students, put back on UNIDOS,” said Benitez.

Castellanos is grateful for the support the administration is now giving UCCS students, but believes that this support is because of the uncertain renewal of the policy.

“Since coming to UCCS, I have been in situations where I felt completely helpless and really alone. I didn’t know what resources I could go to,” said Castellanos. “I felt that the school didn’t really know what to do with me.”

Reddy explains that the administration is doing everything they can to assist the students.

“I am in support of the students, and I really hope that a solution is found. I want to encourage all DACA students to apply for renewals and advocate for a solution. Their voices need to be heard,” said Reddy.

“These students are really trying to make their lives better and make a contribution to the community. I think that it is a tremendous benefit to the campus and the community in general.”

However, UCCS is bound by federal and state regulations when it comes to DACA and other policies, according to Reddy. UCCS is working with the University of Colorado system, CU President Bruce Benson and the CU Regents to find a solution.

“We are doing everything legally possible to support them. The challenge is that it is the responsibility of the Congress to change the immigration laws. It is not something that state administrations have under their control,” said Reddy.

Last fall, Reddy met with DACA students to address their concerns. He said that administration is open to hearing how they can support Dreamers in other ways.

The University of Colorado has also sent a lobbyist to Washington D.C. to encourage lawmakers to come up with a solution that will help DACA students.

“What we can do is lobby, hard, to protect the students. So, if there is anything more that they think we can do, I am more than happy to explore them and to whatever we can to support our students,” said Reddy.

Students, faculty and staff can donate to the UCCS Student Relief Fund at giving.cu.edu/fund/uccs-student-relief-fund.