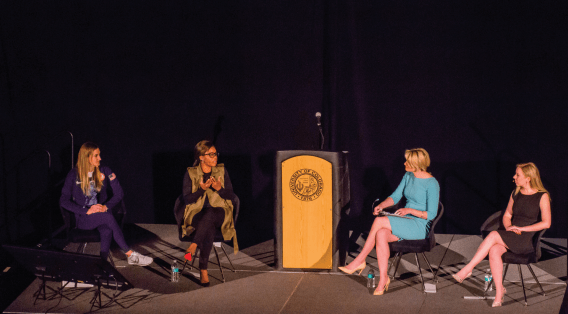 Young girls lined up to tell their idol, three-time Olympic gold medalist and U.S. Women’s Gymnastics team member Gabby Douglas, how much they loved her as she sat on stage in the Gallogly Events Center on a Tuesday evening.

Moderated by Fox 21 anchor Lauren Ferrara, each athlete took turns answering questions about their training, personal lives and the sports they competed in the Olympics.

Brandon Applehans, graduate student, opened the event with a speech, thanking Office of Student Activities and Residence Life and Housing for putting together the athlete panel.

Ferrara took the stage as she named off each athlete to walk on the stage and take their seats.

One question that received a large applause from the audience was from one young girl who asked the panel how they think they have made an impact on the world.

Seely said this was one of the deepest questions she’s been asked.

“I’m not sure how I’ve impacted the world and I hope that over the next 20 to 30 years I’ll be able to see that unfold,” she said.

Flatt said she hopes she’s inspired others in the skating community.

“I hope that I’ve inspired some kids who are extremely passionate about sports to also continue to pursue their education because I think that’s so important,” said Flatt.

“That means going on a path that’s right for you while continuing to learn and grow,” said Flatt.

Ferrara’s questions started by asking each athlete what their pre-competition routine is. Each answer ranged from having a few minutes of silence and watching The Tonight Show Starring Jimmy Fallon to eating a good breakfast and dancing backstage.

As someone who competes in many team events, Ferrara asked Douglas what her team philosophy is.

“It’s weird, because gymnastics is not only a team sport, but is also individual. But it’s a healthy balance because we all wants what’s best for each other and we all push each other to that next level of competition,” said Douglas.

Her team philosophy is that a team should be one, and good, that they should have love and support for one another and never be caddy.

“You want to be a good team player, and no one wants to be a loser,” said Douglas.

“No matter what, if you mess up, we’re not going to be mad. Pick yourself back up and finish. We never get mad if someone fell.”

Ferrara asked Flatt and Seely, “What were some of things you gave up to be an Olympic athlete?”

Growing up in Colorado Springs, Flatt admitted that she lived a mostly normal life while competing.

Seely was diagnosed with three rare conditions, according to Ferrara, who asked her to explain how she overcame training after being diagnosed.

“Never once did I doubt that I was going to compete again. I never really had the expectation of competing in the level I do now,” said Seely.

“The one thing that really kept me going was a desire to be better than the day before. As I got better and better, and I learned how to swim and bike and run again, my first dream was to cross the finish line, after that it was to start competing nationally.”

She wanted to compete internationally and then compete in the Olympics, which she made further goals for after she qualified to compete.

2017-05-02
Previous Post: UNIDOS club hopes to provide safe space for undocumented students
Next Post: What you didn’t know about UCCS: the ins and outs of campus