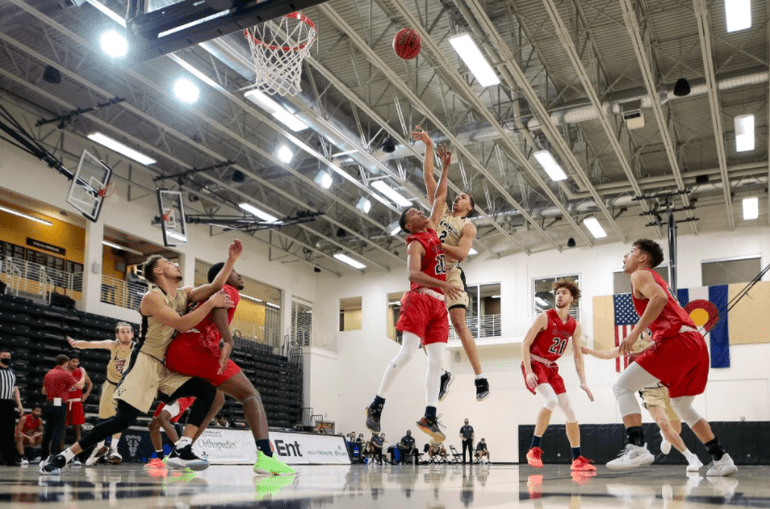 Injuries, COVID-19 made a tough season for men’s basketball

According to Head Coach Jeff Culver, canceled games due to COVID-19, injured players and players being forced to quarantine gave the team challenges and uncertainty throughout.

Games were cancelled early in the season. After playing the first three games with no problems, their fourth game against Chadron State on Dec. 18, 2020 was cancelled for COVID-19 related reasons.

In total, six games this season were canceled due to COVID-19, either by the Mountain Lions or their opponent. They were forced to cancel their game against Westminster, two games against Chadron State and two games against New Mexico Highlands.

Some games were rescheduled to ensure that UCCS played enough games to be eligible for tournaments. The minimum is 11; they played 16.

“Every day we practiced and preparing for the next game, not knowing if we were actually going to play that game,” Culver said. “So, it was definitely a trying year.”

According to Culver, the team reacted well given the circumstances. The season provided several lessons in perseverance and in maintaining a positive attitude.

The team decided to focus on things they could control: their time in the gym or at practice.

Injuries also plagued the team throughout the season. Culver is doubtful if there was a time this season where they played the same players in back-to-back games.

“It was always someone. We’d get back someone off an injury and then we would lose someone else. Or we got someone off a quarantine and then we’d lose someone else,” Culver said. “There might have been a handful of practices this semester that we actually had even ten guys to be able to practice.” This prevented the team from doing five vs. five scrimmages at practice.

Despite ending with a 7-9 record, Culver is proud of the way the team handled obstacles throughout the season.

“You know it’s rare for us to celebrate a 7-9 season but given everything that happened you know I am really proud of the way the guys handled themselves and how they competed,” Culver said.

All 13 players on their roster are returning next season. The National Collegiate Athletic Association (NCAA) granted full waiver for everyone so no one can lose a season of competition. According to the NCAA, Division II student athletes have five years of full-time enrollment at a university to compete in athletics. But they only have four years of eligibility to participate in meets, matches or games against outside competition.

Some players are still working their way back from injuries — some may need surgeries soon. Culver hopes everyone can recover their health and strength before next season.

“If we can keep guys on the court — keep them healthy, we feel we’ll be challenging for championships. Not only next year, but for the next few years to come,” Culver said.

Culver also hopes that the pandemic will be under control by the fall, so they can have a normal season. He is hopeful that things are heading in the right direction.