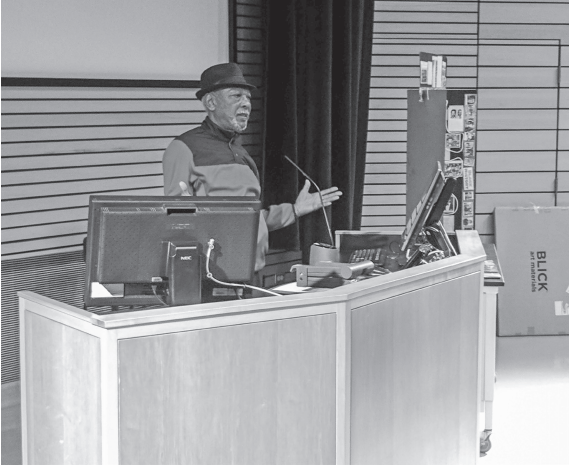 By: Kyle Guthrie
In: Features

“Power is something that derives from individuals. The government exercises it, but individuals make decisions about what they are going to do. We decided to use our power to break the back of segregation.”

With these words, guest speaker John Smith, founder of “The Invaders,” a 1960s black militant group, discussed what it meant to wield power responsibly.

Smith spoke on April 5 in Centennial 203 as part of My Time and Activism with Dr. King.

The event was part of a three-part series from April 5-7, honoring the Equal Justice Initiative, a campaign aimed at spearheading the remembrance of over 4,000 black Americans who were killed by lynch mobs.

“We are what you would call ‘armchair activists.’ We aren’t really the ‘boots on the ground’ sort of activists, at least not as much as we would like to be,” said Lee.

Smith opened up about his time working with Martin Luther King during the strike, and what he hoped his actions could teach activists today.

“What we are trying to do now is bring young people into what it means to be an activist and what activism can really do to bring change about in society, and we are using the ‘60s as a jumping-off point,” said Smith.

“Activism to me means having an idea in your head about how you want society to be, and then putting your effort into bringing it about. It is individuals that make a difference. It is up to you to push it, to bring others into it.”

Smith told a story where fuel attendants ignited his entire view of racial tension in America from an incident involving the repeated theft of his gas cap.

According to Smith, the incident was small, but the lack of respect he received, coupled with the injustice of the thefts, drove his will to change the world.

Jeanine Schumacher, a non-UCCS student who attended the event, explained that Smith’s message was personal, especially since she could recount the night that King was shot.

“I was a child when he was shot, and I remember all the riots and the upset and the sadness,” said Schumacher.

While Smith spoke on many reasons that should have made him bitter and resentful, his overall message was filled with hope and optimism for the future.

He said the best way to overcome the struggles he sees in the world is not through anger, but symbiotic unity.

“Whites have guilt about the history of slavery and blacks have shame. My hope is that we can work together to eliminate both.”

2017-04-10
Previous Post: Why SGA should approve The Scribe’s budget, student journalism at UCCS is a necessity
Next Post: Ent Center for the Arts nears completion of construction, details to be determined