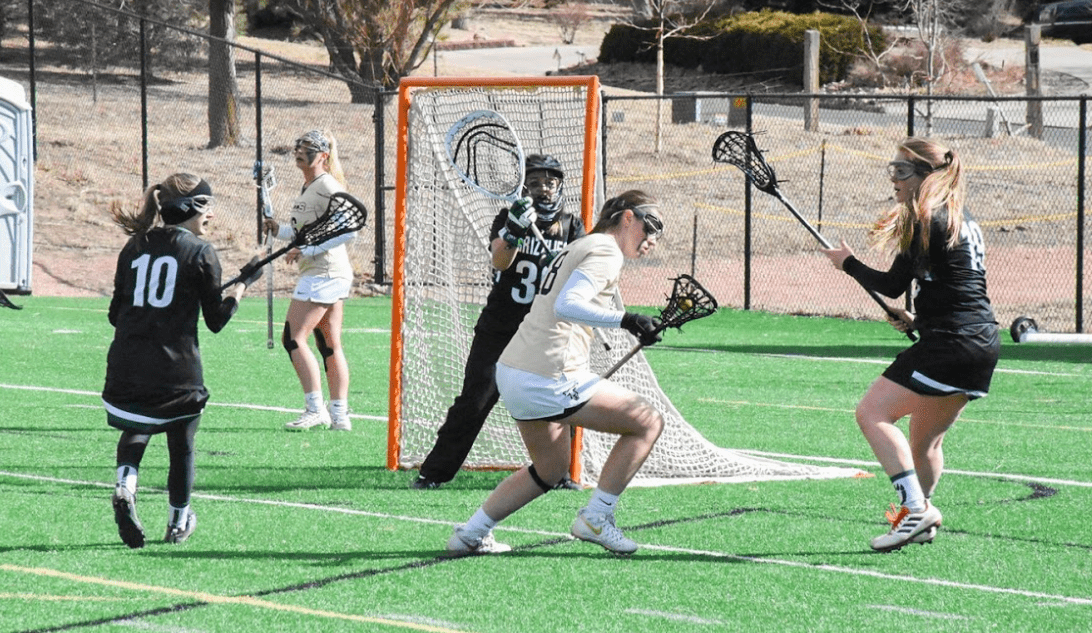 The final score at women lacrosse’s home opener against Adam’s State University was 24 to 1. The Mountain Lions took the field at noon at Mountain Lion Stadium with increasing wind, decreasing temperatures and snow in the forecast. Then they stormed Adams State’s goal, and did not relent until well into the first half of the game.

Vanessa Nelson, a junior, started the scoring three-and-a-half minutes in, finding the back of the net past Adams State goalkeeper Louisa Sanchez. A minute later, UCCS junior Madison Ellis threw in a second goal, followed by two more from freshman Kyer Frederick.

After the game, UCCS Head Coach Christing Hatton said, “We’re really excited about the outcome of the game. I think we played really well together. We’ve got some things to work on now, we know.”

Among the scorers in the game were two freshmen and five sophomores, including Lowe and Church. Church also contributed with four assists during the game, and was last season’s Rocky Mountain Athletic Conference (RMAC) Freshman of the Year.

“We had 10 different kids score today,” Hatton said, “That’s pretty much everyone who gets on the attacking side of the ball.”

“We’re still very young,” Hatton said, “so we have a lot of freshmen and sophomores getting a lot of playing time.”

These include the team’s two goalkeepers, freshman Kennedy Travis and sophomore Emma Becker. Becker started against Adams State, acquiring three saves of four shots, while Travis was in to finish out the second half with one save.

Hatton said it was no surprise.

“We had scrimmaged Adams State in the fall,” Hatton said after the game, “so we kind of had an idea of what to expect.”

Hatton said, “We kind of knew what the outcome of this game would be, so this was, for us, just kind of a test [so we could] get to work on things before we get into a little bit stronger competition.”

UCCS will go on to play five of the top-25 division II lacrosse teams in the country, including the University of Tampa, Colorado Mesa, Lindenwood University and Regis University. The team will also play against Colorado College, which is ranked No. 2 in division III’s western region.

At press time, UCCS was set to take on Regis last Saturday, Feb. 23 at 1 p.m. Regis was ranked No. 8 nationally, while UCCS was unranked.

UCCS lacrosse’s next home game is on March 4, at 5 p.m. against the University of Tampa, which is ranked No. 19 in the country.

After their victory over Adams State, Hatton said she is happy with what the team has learned, and that they are excited to move forward.