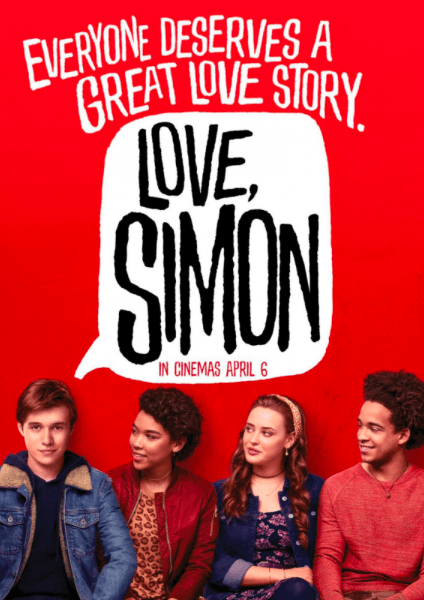 “Love, Simon” is the beginning of a new era of acceptance.

The film tells the story of Simon Spier (Nick Robinson), a 17-year-old high school student who struggles with coming out as gay. “Love, Simon” normalizes the taboo topic of sexuality, with the message that a person’s sexual identity does not define them.

Simon must face the emotional struggle of coming out to his friends, family and community throughout the one hour and 50-minute run time.

“Love, Simon” was an emotional movie for me to watch, not because it’s sad, but because I’ve witnessed first hand how difficult coming out can be with both my sister and my best friend.

I’ve seen them hurt from the reality of it, be ashamed of what others think of them, hide their true selves and worst of all, try to change who they are to please the rest of the world.

This film did a spectacular job of explaining that homosexuality shouldn’t be any different than heterosexuality.

There were moments in the movie when I found myself laughing out loud, times when I felt like I could cry and moments of critical self-reflection. It was a film that made me feel inclined to stand up at the end and clap in applause.

“Love Simon” offers a great perspective for people who don’t understand the LGBTQ+ community, and should encourage everyone to be more mindful of their actions towards others.

The director of the film, Greg Berlanti, captured the adversity that young adults face from the backlash of coming out. Robinson was the perfect actor to play the part of Simon, who was a relatable character.

Simon’s parents, portrayed by Jennifer Garner and Josh Duhamel, gave the film a sense of warmth. His family was supportive and accepting, reminding me of “The Edge of Seventeen” and “Perks of Being a Wallflower.”

Although I loved that Simon’s family was accepting, I wish the film would’ve showed how even family members can sometimes be unaccepting of a person coming out. I think this element of the film could’ve made it even more powerful and relatable.

However, I think having an accepting family may make those who watch the film more inclined to come out themselves if they haven’t already.

Ultimately, one of the most powerful messages from the film is that hiding a secret or your true self not only hurts you, but it can also hurt those who care about you. This film showed the importance of staying true to who you are in any circumstance, because being who you are is worth the hardships.

The plot aspect of exposure was one that I loved the most, because it brings to light one of the biggest nightmares for people who identify as LGBT+: being exposed before they are ready to come out.

I hope by watching this film, people can realize that there is so much more to a person than who they are attracted to or who they love.

“Love, Simon” is a movement by itself, and a step in the right direction for not only equal rights and treatment for the LGBT+ community, but also equal representation in the film industry.

Being gay, like Simon says in the film, shouldn’t be seen as any different from being straight.