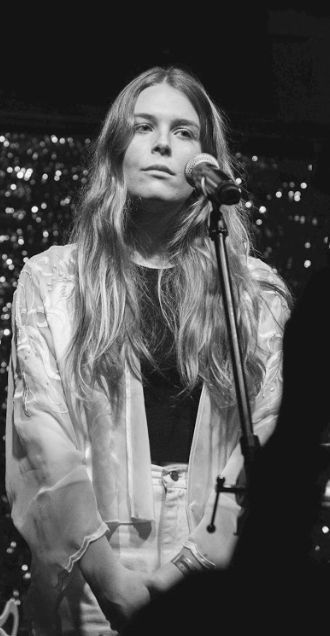 The 24-year-old New York University student, Maggie Rogers, studying banjo and folk music, hit stardom in 2016 when a video of her showing top billboard artist and producer, Pharrell Williams, an early demo of her song “Alaska” in a masterclass went viral.

The video, which ended in a standing ovation from Williams after hearing Rogers’ song, is now close to three years old and has nearly reached one million views on YouTube. “Alaska” would later be on her first record, “Now That The Light Is Fading.“

“You’re doing your own thing, it’s singular,” said Williams in the video.

Since then Rogers released her 2017 album “Now That The Light Is Fading,” she has performed on SNL, Jimmy Fallon and has been featured in Rolling Stone Magazine.

“Now That The Light Is Fading” is an album that just started to breach folk-pop, a genre that Rogers wanted to test, but was not confident in its delivery, although it excelled in its electronica nightclub beats.

“Heard It in a Past Life” is now Rogers’s second album, released Jan. 18. The record is like a heartbroken nightclub filled with past mistakes and growing out of teenage years.

The lyrical messages behind “Heard It in a Past Life” is about the prepackaged Cinderella story that came with Rogers’s success. The honest look at her introverted lyrics begs to listeners that the fame life was not made for her while her music tells us otherwise.

The impatient world that Williams’s applause brought Rogers into made an album that could have been better executed if the music industry would incorporate artist development into its agenda.

The tracks “Give a Little,” “Light On” and “The Knife” lack the folky electronica songs that inspired her to begin her musical endeavors and instead incorporate lackluster vocal takes.

If any previous knowledge was known about Rogers’ music before this album was released, it’s the fact that her track “Alaska” was recorded and mastered by herself and inspired by a trip she took to Alaska by herself.

Rogers’s year long hiatus between her first and second album should have lasted an extra year where Capital Records would not have been breathing down her neck at the mixing board – and instead pushing her to put a little more original thought into her work.

The only songs that begs for a second listen is “On + Off” and the copy-and-pasted “Alaska” from “Now That The Light Is Fading.”

There are too many songs on “Heard It in a Past Life” that have an overproduced quality and stray from the comfort she gained in music school as a folk artist. It’s as if Capitol Records gave in to Rogers’s final plea and allowed her to use her voice more as an instrument rather than a reason to create sappy flavorless lines.

The future for Rogers looks bright; however, the raw and honest demo titled “#” posted on her SoundCloud proves to us that the pressures of a hit single haven’t swallowed her whole.

A powerful performance of “#” was published on YouTube in 2018 at The Sinclair theater in Cambridge that demonstrated even a two-chord song could have just as much an impact as a studio performance with the support of a major record label.