By: Joe Hollmann
In: Uncategorized

The tenure/tenure-track segment includes professors, associate professors and assistant professors, with the first two having tenure and the latter in the process of obtaining it.

Tenure is received after the individual has demonstrated meritorious performance in three areas: teaching, research/creative work and service. They undergo intense reviews generally through a five-to-seven-year process.

The non-tenure-track category includes instructors who are usually hired on a yearly contract basis, and lecturers who usually come in to teach on a course-by-course basis.

According to UCCS’ 2014-15 report to the Integrated Postsecondary Education Data System, the school had 448 full-time teachers. The nationwide database is managed by the U.S. Department of Education. 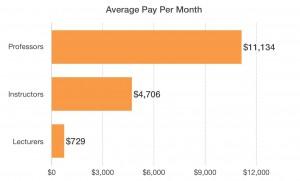 Despite the number of tenured professors and instructors being fairly close (156 to 184), the majority of credit hours are taught by instructors and other non-tenured faculty.

In data released in 2014 by the Office of Institutional Research, 68 percent of the credit hours taught on campus were taught by instructors and other teachers. 30 percent was taught by tenure and tenure-track faculty.

Robyn Marschke, director of the Office of Institutional Research, said part of the reason not all classes are taught by tenured professors is cost.

“You have to figure out the program cost to deliver the revenue to hire professors,” she said.

She added that ideally the university wants the majority of classes taught by tenured professors.

“Lecturers are paid a couple thousand dollars per course,” she said, adding they can teach up to ten classes a semester.

This contrasts with tenure and tenure-track professors, who might teach five courses a year and make much more in salary.

According to the IPEDS data, professors on average make $11,134 a month for the nine months of the year they are put on salary.