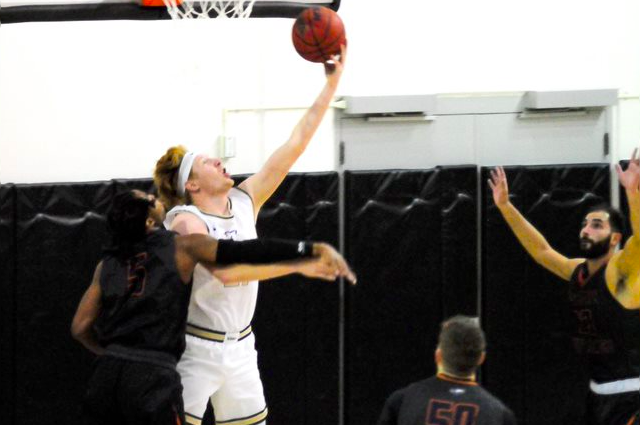 After a close first half, UCCS men’s basketball exploded in the second half with a 20-1 run to help win 96-67 against the Northern New Mexico Eagles on Nov. 4.

Both teams came to battle through all four quarters of the exhibition game. The game was an even competition in the first half, with both teams’ scores staying within seven points of each other.

UCCS was not down for long. Taking advantage of one minute left in the half, junior guard Jon’il Fugett hit a 3-pointer. The shot was followed by a buzzer-beater jumper by redshirt sophomore forward Wyatt Dolberry to tie that game at 43.

Coming out of the half, UCCS stormed up and down the court to go on a massive 20-1 run that included 17 unanswered points. The offensive run was followed by a strong defensive stand with the Mountain Lions holding the Eagles to only 24 points in the second half.

The game came to end with redshirt freshman Noah Baca putting in a layup to send the Mountain Lions up 96-63. Four Mountain Lions ended with double-digit points in the game, with Fugett leading the team with 18 points.

Fugett made all three of his 3-pointers and shot a 70% from the field overall. He also led the team with seven assists.

UCCS out-rebounded NNMC 46-30 with freshman guard Jezza McKenzie leading the game with six of his own. Another important piece for UCCS was redshirt sophomore guard Bobby Martin, who put up 13 points off the bench and shot 3-5 from deep.

The men’s basketball team kicked off their regular season on Nov. 12 in Wichita Falls, Texas, where they took on Midwestern State University.