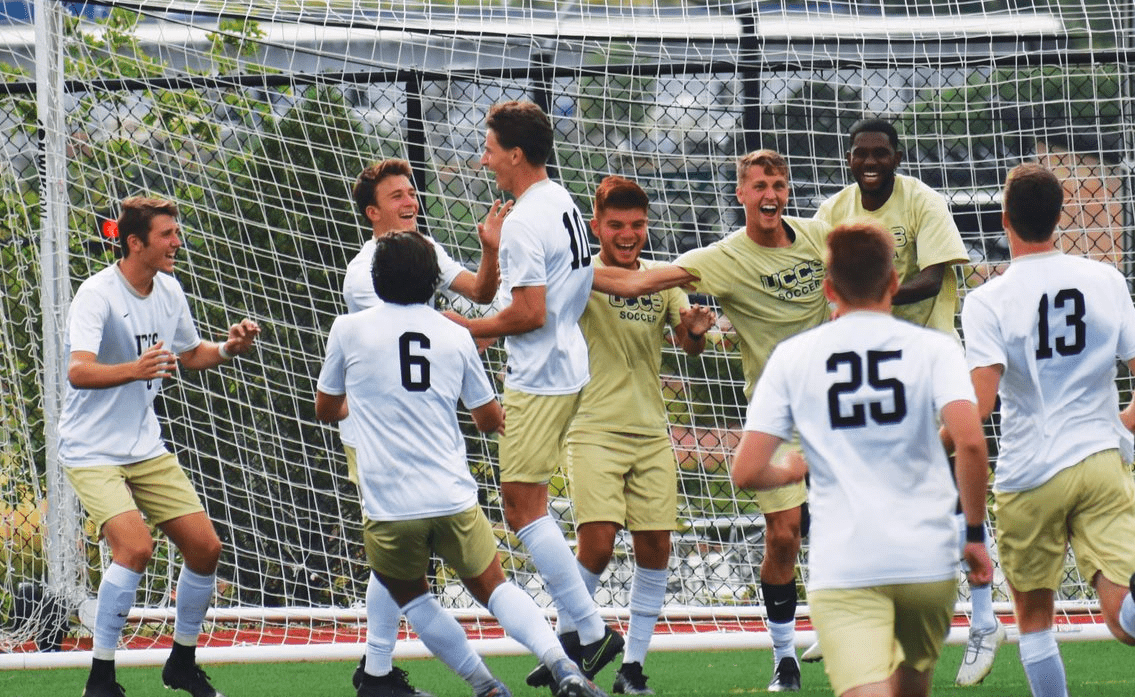 In their third game of the season, second at home, the UCCS men’s soccer team faced off against the Hilltoppers from St. Edward’s University.

Coming off a 1-0 upset win against No. 25-ranked St. Mary’s on Sept. 13, the Mountain Lions drew 3-3 against the Hilltoppers on Sept. 15. The game wrapped up a round-robin tournament hosted by UCCS as a start to their regular season.

St. Edward’s threatened early, drawing several fouls and giving themselves free kicks in key areas on the field. The Hilltoppers broke the 0-0 deadlock off a free kick goal from junior George Murray.

UCCS continued to threaten as the first half progressed and broke through in minute 45. A low cross from the left side by freshman Alex Daseler was sent on goal by freshman Zane Baumgardt and found the bottom right corner.

A sprawling save by UCCS goalie and senior Scott Jensen in minute 49 kept the game tied.

Both teams increased their physical play resulting in multiple fouls being called within minutes of each other.

UCCS was disadvantaged in minute 58 when junior Sam Bonano got double yellow cards within seconds.

UCCS pulled ahead in minute 70 after a combination play in the final third from redshirt sophomore Adam Baldwin and redshirt freshman Liam McGuire. A cross to the far post from McGuire found senior Alex VonHolle, who finished from close in.

Less than a minute later, the Mountain Lions doubled their lead on a goal from McGuire. Scott Jensen’s goal kick found McGuire, whose header from about 30 yards out caught the Hilltoppers’ goalkeeper by surprise.

St. Edward’s goal in minute 84 brought the score to 3-2 after UCCS failed to clear a cross sent in by senior Cody Spitzer and the ball fell to senior Parker Fyfe right in front of goal.

A shot from the right side by Fyfe in minute 90 was kept out by another sprawling save from Jensen. UCCS defenders allowed freshman Grant Vernon to finish off the rebound left by Jensen bringing the game to a tie.

A bicycle kick in minute 98 from the Mountain Lions was ruled offsides.

St. Edward’s controlled possession for most of the second overtime but kept the Hilltoppers scoring opportunities low, ending the game after double overtime in a tie.

After the round robin tournament, the men’s record sat at 1-1-1.

At the time of print, No. 5 ranked Mountain Lions traveled to face the No. 7 ranked Regis University. The men’s next game will be Sept. 27 against Westminster at Mountain Lion Stadium at 6 p.m.