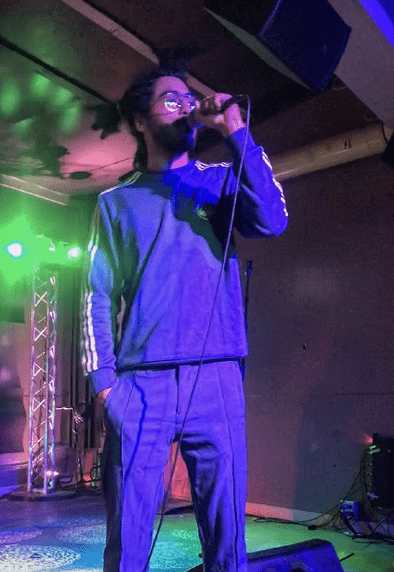 Milo, aka Scallops Hotel, aka Black Orpheus, aka Nostrum Grocers, is a 26-year old rapper from Wisconsin who incorporates the philosophy classes he took in college to spit out power lyricism.More than ever, Milo proves to his listeners that it’s his massive vocabulary that pays his rent at the end of the day.

Starting his own record label, Milo puts out his own music on Rudy Yaught Records, with a slew of wordsmith artists following in his path. The group of wordy poets that Milo has taken under his wing and pulled inspiration from over the years, like Busdriver and Open Mike Eagle, has been re-defining the genre of rap entirely, one off-kilter beat at a time.

Milo is a bookworm, philosophy know-it-all and observant, an interesting set of characteristics to be a rapper – but he seems takes comfort in it.

Releasing “Budding Ornithologists are Weary of Tired Analogies” on Sep 21, it’s clear that Milo is just as much fearless of criticism as he is at creating long album titles. His head seems to wonder rapidly on this record, spitting out everything that comes to mind in one fell swoop, while incorporating sly underhanded stabs on society.

Take, for example, “Neurosis generating energy/ like how you lose focus looking for enemies” on the track “Mythbuilding Exercise No.9”

The album takes shape of a boom bap rap track that falls between walking into the club with your best friends and a lonely stoner bedroom anthem.The beats in Milos’s new album are nothing to ignore. Although hard to grasp at times Milo never really struggles to find his groove while rapping.

Dialing the energy of the beat back, the previous records Milo has released, like “Nostrum Grocers” or “Who Told you To Think”, seemed more angry and fast paced.

If you think the sleepy stoner lo-fi beat genre is overrated and only used for half of those half-listening study sessions, then Milo might change your mind.

The album’s scattered tracks, like “mythuilding No.9” and “Mid Answer Trying to Remember What the Question is”, are loose and chill like any lo-fi beat, but instead of staying mindless and stagnant, the beat changes, always morphing into something melodic and unpredictable.

The combination of that unpredictable beat and Milo’s motivating, energetic lyrics would inspire any couch-locked individual to put down the Bic lighter, change their filthy bong water and go for a walk – even with lo-fi beats behind it.

Not questioning or holding back a single thought that comes to Milos’s head; an honest individual who tells it like it is – it’s probably going to be Milo who makes some sarcastic remark to you that you might have just picked up on a few hours later.

Being cocky and a leader at the same time is a hard act to pull off, but Milo seems to take comfort in it.