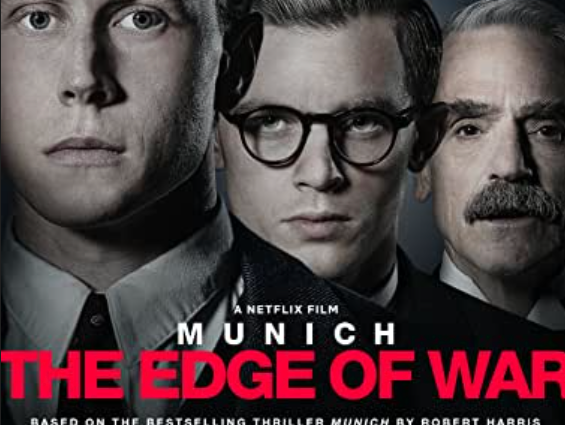 ‘Munich: The Edge of War” is a suspenseful war drama/thriller

“Munich: The Edge of War,” now streaming on Netflix, delivers on its promise as a war thriller and a historically relevant drama. Adapting a fictional plot from Robert Harris’ 2017 spy novel based on historical World War II events, this movie expertly explores the moving pieces in Europe before the start of the fateful era.

Englishman Hugh Legat, played by George MacKay (“1917”) and German Paul von Hartmann (Jannis Niewöhner, “Ruby Red”) are peers from their time at Oxford, but find themselves in a plot against time. They must work together to subvert Hitler’s true plans for Europe, attempting to interrupt World War II. You might be able to guess how successful they were.

The film is riddled with overtures to the antisemitism of the Nazi regime, a historical reality that brings soberness many try to understand, but only a few truly know. The movie also raises the question: What is the best strategy for stopping evil people?

Moreover, “Munich” attempts to untangle the knot of debate about Prime Minister Neville Chamberlain, giving a more apologetic view of his actions than most. The traditional historical perspective is that Chamberlain naively believed Hitler was only interested in Czechoslovakia’s Sudetenland.

This movie shows a more strategic Chamberlain — a Prime Minister who knew that Britain needed time to prepare for war with Hitler.

The Munich Agreement of 1938 is widely known as a futile attempt to appease the Hitlerian totalitarian regime despite giving the Allies time to prepare for full-on war. Prime Minister Chamberlain’s infamous declaration that there will be “peace in our time” following the agreement is still a history lesson for leaders ever since.

Recent events of this year reveal that maybe we have not learned all that much.

Watch this movie to hear a more understanding perspective of Prime Minister Chamberlain’s actions with the Munich Agreement of 1938. In addition, it is a great war film, and its elements of thriller, drama and suspense are excellent. Jeremy Irons steals the show with his commitment to portraying a nuanced Neville Chamberlain.

Further, the espionage parts of the film are solid, intelligent and suspenseful, unlike most other unrealistic war-spy movies. The movie takes you back to a significant time in world history, and its realistic approach keeps you there for the entire two hours and three minutes.

“Munich” is one of the best recent releases that Netflix offers, and it is well worth your time.