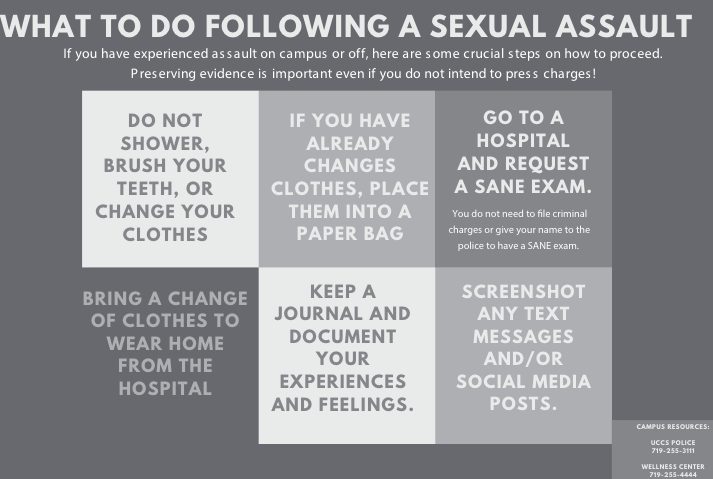 Not enough UCCS preventative initiatives regarding rape and sexual assault

By: Mara Green
In: Editorial

University of Colorado at Boulder student Connor Lee Shaver, 21, was arrested on Sept. 5 for the alleged rape and sexual assault of another student.

As horrifying as it is, it is not a story unfamiliar to the Boulder campus. Over the last three years, there have been multiple allegations of rape by Boulder students. One which resulted in the disbanding of an entire CU Boulder fraternity.

According to an article by the Daily Camera, Boulder County Judge Zachary Malkinson said that there is enough evidence to move forward the case against Zachary Orion Roper, the University of Colorado Boulder student accused of raping a fellow student after a sorority event in January, and whose arrest prompted university-wide protests calling for his suspension.

Rape and sexual assault continue to be a problem throughout the CU System.

Over 1 in 4 female CU students (28 percent) and 1 in 18 males (6 percent) experience rape or sexual assault as undergraduates on campus, said CU Boulder’s website.

Women and men who are sexually assaulted may face health problems that include depression, anxiety and post-traumatic stress disorder. Students cannot focus on their studies when facing an emotional crisis on their value and worth because people like Shaver and Roper could not respect their autonomy.

Although UCCS does not have the same magnitude of statistics surrounding these issues, there are still not enough preventative initiatives taking place here on campus to avoid UCCS contributing to the CU system rape and sexual assault statistics.

UCCS offers support for victims of sexual assault, like the initiatives from the UCCS Title IX Coordinator, Julia Paris, but many students are not even aware of what UCCS is doing to prevent rape and sexual assault or helping students if this does occur. The most visible program on campus to help students avoid becoming victims is Never-A-Victim run by campus police Sgt. Lisa Dipzinksi, which trains students in self-defense techniques.

The UCCS Sexual Assault resource website has steps listed to take if this does occur to help preserve evidence.

Twenty-one percent of LGBTQ college students have been sexually assaulted and face increased levels of harassment compared to non-LGBTQ members. Most college sexual assaults occur during the fall semester, with 90 percent of assaults being committed by someone the victim knows. An estimated 54 percent of assaults go unreported, mostly because survivors are too scared to tell or they do not believe that the assault was serious enough.

The CU System needs to be more proactive — not just reactive — and campus resources need to be made more available to students.

When we do not work together to prevent assault, both sexual and non-sexual, we fail ourselves and each other.