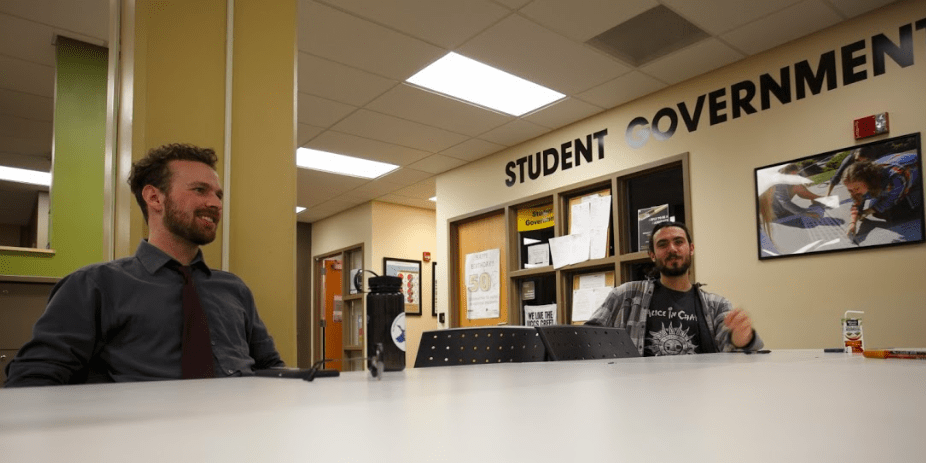 By: Valeria Rodriguez
In: Features

On Feb. 12, 2019 individuals interested in, or part of, the Philosophy Club gathered for the first event of the semester, titled “Meet and Greet.” The group initially met at Clyde’s and then soon migrated to a table next to the student government offices, due to the collision of an additional event also being held at Clyde’s that evening. 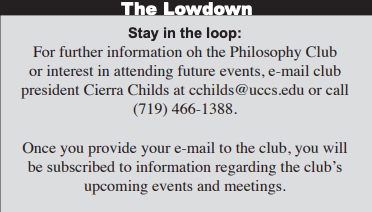 At the start of the meeting, all were encouraged to introduce themselves and share their major with the group. Most students were majoring in philosophy, and others were working towards a minor in this study. A couple of other fields of study mentioned by attendees included political science and one mechanical engineering student.

Amid the meeting, a president of the Philosophy Club, Cierra Childs, addressed the appeal in having diversity in its members within the club.

She expressed that having a multitude of majors in the club, aside from philosophy, supplies discussions with a variety of unique ideas deriving from different backgrounds.  All students are welcome to join, especially those who have a curiosity for philosophy and an interest in getting to know its undergraduate community.

During this seminar, the team shared ideas for potential future events to be held by the Philosophy Club. They engaged in communicating probable topics for future group discussions, having philosophy professors as guest speakers and having movie nights.

One of the probable topics for a future group discussion consisted of philosophy in politics. An example of this provided by Nicolas Nava, a mechanical engineering major and photographer for The Scribe at UCCS, was the topic of socialism.

This idea was inspired by Nava’s personal experience living in Venezuela and the country’s current political socialist status, being controlled under the wings of two presidents.

Other possible topics for future conversations are philosophy in comedy and cultural appropriation, contributed by Childs. In addition to the presence of philosophy in social justice, artificial intelligence, art and the comparison of skepticism and relativism made the list of topics.

Future goals for events incorporate the attendance of guest speakers, such as philosophy graduates or philosophy professors of UCCS talking to the group about the area of expertise they have in the field.

Shawn Cannon, a president for the Philosophy Club and a senior studying philosophy at UCCS, provided the idea to gather people for movie nights. Some of the films mentioned for future screening events may comprise of “The Favorite,” “Arrival,” “Ex Machina” and a few movies directed by Alfred Hitchcock.

In addition to movie nights, Cannon mentioned that in the previous year for the Philosophy Club, the group gathered for informal meetings called “Drink and Thinks.” This involves members of the group hanging out at a bar and having unplanned topics of a variety in a conversation. An event in favor by the group for returning this semester.

Cannon describes the philosophy club as the opportunity to expose your opinion to others but then grow from being civilly “criticized” by peers and learn how to develop stronger arguments.

“We just pick at each other’s arguments,” shared Cannon during the meeting.

The Philosophy Club is free of a membership fee and is currently absent of a regular meeting day, though Childs is committed to finding a day or two that works in favor of the schedules of its members. “Either Mondays or Tuesdays,” Childs said.