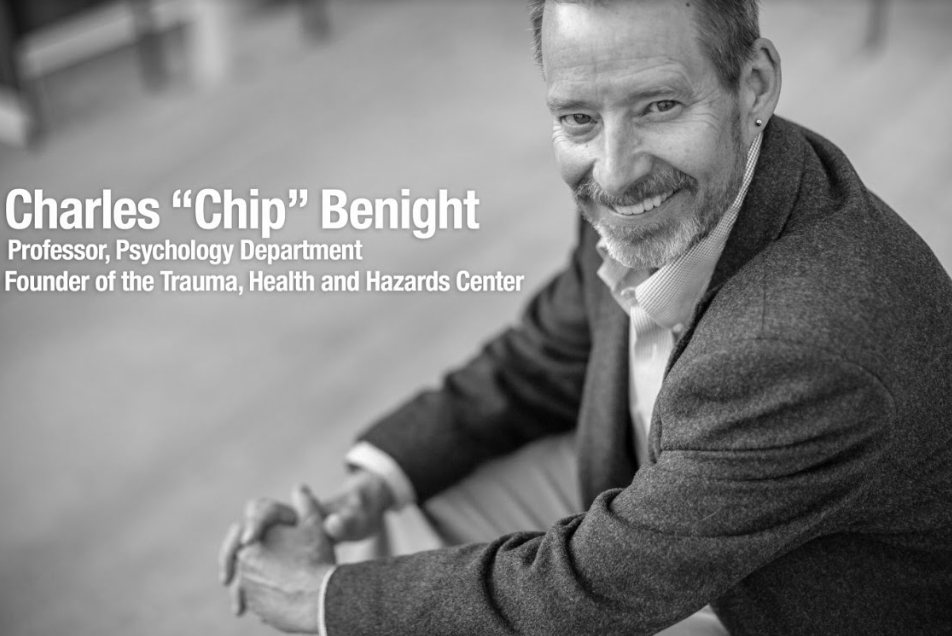 In the last year, Professor Charles Benight of the Psychology department has published six papers published on trauma recovery and adaptation, and three more are in the process of being published in 2019.

“We published a total of nine papers last year. Six of them are already published and three are in process right now. They focus on understanding how people adapt to trauma and a couple of them focus on a theory that I’ve written called ‘self-regulation shift theory.’ It focuses more on the unique aspects of how people struggle with coping as an attempt to manage what happened to them after a major event or experience,” said Benight.

Benight began his time as a faculty member at UCCS in 1993, and has since used his own personal experiences with trauma to focus his studies and career on trauma recovery and adaptation.

Benight has also helped survivors through his creation of trauma recovery websites.

“We already have websites that have been shown to help other trauma survivors called ‘My Trauma Recovery’ and ‘My Disaster Recovery,’” he said.

According to the websites, My Trauma Recovery is a web-based program created to help users begin to resolve issues related to trauma and Post-Traumatic Stress Disorder (PTSD). It offers information about PTSD, guidance for healthier coping methods and resources for gaining support or seeking professional help.

Currently, Benight, along with other UCCS faculty, is working on furthering the effectiveness of a website to help people with trauma through artificial intelligence.

“We have a pretty big National Science Foundation grant allowing us to work with Terry Bolt and Rory Lewis from Computer Science. We are focused on trying to develop a smart web intervention system for trauma survivors using artificial intelligence to become more and more effective at helping recovery,” said Benight.

“We are getting somewhere, but we’ll have to see. That’s high level stuff,” said Benight.

Benight earned his Bachelor of Business Management in 1983 and his Master of Counseling in 1986 from Arizona State University. In 1992, he earned a doctorate in Counseling Psychology from Stanford University with an emphasis in Health Psychology and Behavioral Medicine. Finally, before relocating to Colorado Springs, Benight completed postdoctoral training at the University of Miami.

However, while he pursued higher education in behavioral medicine, Benight found himself in the middle of three different traumatic experiences.

“I was involved in a couple of different disasters. All of which really sort of prompted me to switch my focus from behavioral medicine and start focusing on trauma and disaster recovery,” said Benight.

His first encounter with disaster was in 1986 while studying at the University of Freiburg.

“I was in Germany during the Chernobyl explosion in Europe. I was living there with my wife at the time,” he said.

The Chernobyl Accident was a catastrophic meltdown of a nuclear power plant in Ukraine. Operational error paired with a flawed reactor resulted in a meltdown that ultimately took the lives of 30 people, according to the World Nuclear Association.

Not long after, Benight was pursuing his doctorate at Stanford when the Loma Prieta shook the San Francisco Bay area in 1989. Benight reports that he was in class when the earthquake hit. This disaster resulted in 60 deaths.

Before his move to Colorado Springs, Benight experienced his third life changing disaster in a six year timespan.

“I moved to Miami right before Hurricane Andy hit,” he explained.

Hurricane Andrew was a category 5 hurricane and, in 1992, was the most destructive hurricane to ever hit the coast of Florida. The storm killed a reported 44 people.

With these experiences, Benight refocused his career to studying human adaptation from trauma, and is currently developing ways to help people who are struggling with traumatic experiences.