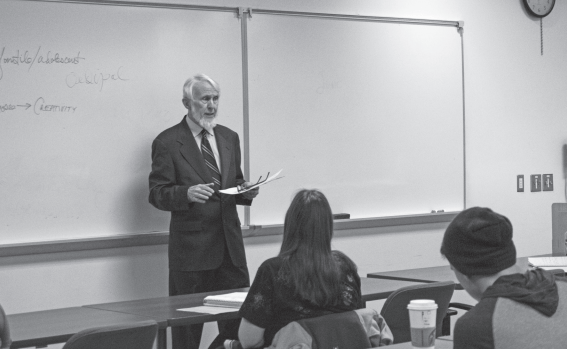 Not many professors can say that they had to find library books in a bathtub. But Kenneth Pellow is no ordinary professor.

Pellow has been an English professor at UCCS since 1969, seeing the college both at its beginning and its evolution from a small commuter school of 600 students to the university it is now with over 12,000 students last fall.

Pellow will retire from his career spanning over 40 years at the university this spring. The Scribe asked him about his experiences and observations over the past 40 years.

Q: When did you come to UCCS? Why did you decide to work here?

A: I came to UCCS in 1969 because there was a job here. In those days, a brand new English Ph.D. still had some choices of jobs, but that’s gone by the borders since then.

I went to the Modern Language Association Convention in New York and had six or seven interviews there. Most of those were still pending. UCCS was the first one to formally extend an offer to me.

The next day after I called (UCCS) and said, “Yes, I’m accepting your job.” Another offer came in the mail. If it had come first, or they had come together, I would have almost certainly taken the other one.

It was close to both New York and Philadelphia, and at the time I was young and stupid, and I really wanted to be near big cities.

Now anytime I go to visit New York or Philadelphia, I think, “Oh, thank you whatever gods that prevented me from this.” So I took this one, and I’ve never been sorry. It was a good place to come to in those days.

Q: What has changed the most at UCCS?

A: Oh dear where to begin; numbers first of all. We had, when I came here, approximately 800 students, and not nearly all of those were full time. The full-time equivalence was around 650- 675 students.

We only had the buildings that had been bequeathed to us by the sanatorium; we didn’t build our own until 1971 or 1972 when we built Dwire (Hall).

The accreditation people said, “You need to have a library.” It was in one of the buildings that the sanatorium left behind that we named South Hall, and it had been the nurse’s quarters in the sanatorium.

Every room in the building was divided into three or fourdozen rooms, and each one had a sink and a bathtub in it. The sinks were pretty easy to tear up; the bathtubs weren’t, so they got left in there.

When you would go to the library to check out a book, you would frequently be told, “Now we have that one probably. It’s in room ‘blah blah’ upstairs in the bathtub. That’s where the books were stacked; they would be piled in the bathtub.

There was no harm; the bathtubs were long since dry. It’s the oddity of, “Oh, I’m digging through a bathtub to find a library book.” So that was our first library.

What’s mostly different is not the number of students, but the number of faculty. When I came here, (during) the first three to five years, I knew on sight every professor at this campus in whatever college— everybody. I was the third English professor, and I taught four classes every semester.

That’s another big change; we were moving from a surely instructional college to partly a research institution. You don’t do any research when you’re teaching four classes.

Q: How did ‘riverrun,’ the student literary and arts journal, begin?

A: Interestingly enough, (“riverrun”) was a student initiative. Students came to me and they said, “We really, really would like to have a publication that includes writing of students here.”

Poetry, short fiction, nonfiction perhaps, but mostly in the early days, it was poetry and short fiction. There was no art at the time—that was a later addition.

They came to me and asked, “Would you be our adviser?” and I said, “Well, why me? Am I the most creative person you have here?”

Their answer was pretty much along the tone of “Everybody else is pretty busy.” I just said, “Oh, thank you. I’m so flattered.”

Some of the students had been with me the previous semester in a class on James Joyce. They were still steeped in Joyce that they took the title of the journal from Joyce of course. That’s the first word of “Finnegan’s Wake.”

I had no notion whatsoever at the time we would still be doing the journal 30 or 40 years later. I thought if it survives until next year, fine we’ll do it again. I had no hopes that it would go more than two or three years.

The students who had the push behind it would be gone in a couple of years, and I thought there won’t be a lot of people who will want to pick it up.

It has become everything I’ve wanted it to become. It has been marvelously produced.

Q: What will you miss the most from UCCS?

A: The students, the people and the interactions with students. I get to read all the great books of the world, and I get to come into a classroom with bright minds and discuss them.

I often think, “I can’t believe I get to do this for a living.” Sure, there is work that comes with it, but it is worth it.