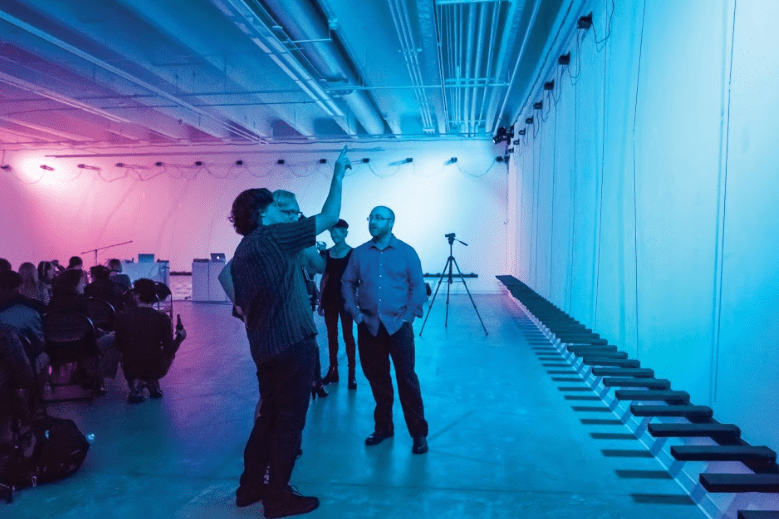 By: Sandy Fales
In: Features

Music is created in a variety of ways; using pieces of a clock to imitate the sounds of a drum is no exception.

Theodore started the artist talk by discussing the inspiration for his art, including his hometown of New York City.

Theodore’s love for art started in his childhood. His mother was an artist and material was always lying around to use.

Upon seeing a piano when he was a child, Theodore insisted that his parents buy one.

During a Q&A session, an audience member asked if Theodore aims for a particular outcome from his audience.

“I want to provide an experience that is very open ended,” Theodore responded.

The performance began with Theodore’s electronic Musical Instrument Digital Interface controller. Black boxes were attached to the walls with wires and metal poles to make music.

Whitehead played the trumpet along with the sounds. The music was methodical as the metal rods on the walls swayed back and forth hitting wooden blocks below them. The shifting colors casted from lights attached in corners of the room created shadows through the installation.

The metal arms swayed faster and faster to build up to Theodore playing the saw. The eerie sounds of the saw, low groans from the trumpet and the constant ticking from the metal arms filled the gallery. Theodore and Whitehead kept their sound together by using improvisation within a blueprint, explained Glen.

The artists were not limited to a single instrument during their performance. Theodore played his MIDI controller, a saw, electric guitar and clock parts used as a drum, while Whitehead played the trumpet in several different ways as well as blowing through seashells throughout the show.

As the show progressed, the feelings of music and rhythm changed from methodical to unpredictable. From the sounds to the color in the room, the performance went from chaos to order.

The echoing sounds of clicking metal arms were followed by guitar plucking. Sharp notes from a trumpet responded in a musical conversation.

The end of the performance was like saying goodbye to an old friend one had not seen in a long time: sad and unwanted. Theodore and Whitehead outdid themselves by adding a layer to the “micro/macro” installation with a combination of their talents.

Students like Lindsee McCrea, a student of Whitehead’s, enjoyed the performance.

“I thought it was really cool how the color affected the way I perceived the music,” said McCrea.

“I thought it was unique and really resonating, and I loved the outer worldly sounds, the kinds of things you would hear suboceanic,” said Becker.

“You know what would make me happiest? For (the audience) to see and listen with a little more attention than they normally would in life,” said Theodore.