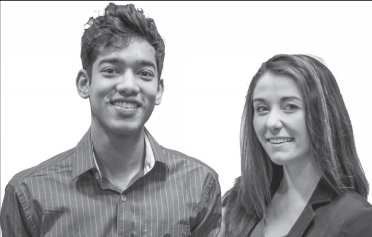 On April 17, Joey Vijayam and Kennedy Watson were elected as 2017-18 student body president and vice president for the 2017-18 school year.

Vijayam, a junior biomedical science major, and Watson, a junior international business and special education major, won the student elections with 54 percent of the vote, coming in with 875 votes.

Now, the two are preparing to take over the Student Government Association.

The Scribe sat down with the newly-elected student leaders to talk about their plans for the upcoming academic year, the inner-workings of student government and what they want students to know about their administration.

Q: What have you gained out of of the SGA experience so far?

Watson (W): I’ve gotten a lot of resources from it. I’ve met a lot of people, and everyone that I’ve met from this point of contact cares.

Before I joined SGA, I didn’t realize there were so many people on campus that were so involved and invested. I’ve also gotten a lot of knowledge. Now I know how bills work, everything in our constitution; I know how to abide by our governing documents, and I know what’s feasible for students and what’s not.

Q: What made you want to run for president and vice president?

Vijayam (V): Being in this position, I get to work with other student government members and various leaders on campus who want to make the campus as awesome as it can possibly be.

W: When I joined as a senator, it was just made really apparent that student government is just 25 people who are not getting paid, but they’re devoting hours upon hours each week just to help other people.

The people in student government are just purely passion-run. They’re accessible, kind, compassionate people who only joined so they can help others. I really just wanted to continue the work that I’ve started and continue helping people.

W: As far as who picked what position, it might have been made a conversation if we knew we were running sooner, but I was planning on running as a senator. He came up to me and said, “I want to run for president, will you run with me?”

V: I had been interested in running for president for a while. Kennedy saw that and talked to me about what she wanted to do. I admire her passion and her drive for the school. I admired how hardworking she was, and I thought that both of our visions for the school aligned very well.

Yet we think very differently, and we challenge each other for different things. I really like our partnership, because it allows Kennedy to say, ‘OK, here’s the stuff that I want to work on,’ and it allows me to say, ‘Here’s what I care about.’ It truly is a partnership.

Q: What projects are you working on this year?

W: I work with individuals with disabilities, so I’m really huge into a disabilities initiative. I’m going to work to educate the whole campus on disabilities and how to properly articulate when you’re talking about disabilities.

V: I’ve been working with some clubs to get an e-bike initiative set up around campus. I want to have different bike stations around campus where students can use an electric bicycle that’s charging when not in use to travel from one part of the campus to another.

(The National Society of Black Engineers’) idea is that your legs power the bikes, but it also has a motor if you don’t want to pedal. My goal is to just have bikes set up around campus.

It would be a bit different (than the Recreation and Wellness Center’s bike share program). My basic idea is to just have more bicycles, but there have been talks about having electric bicycles or solar-powered bicycles.

Q: What would you like the incoming class to know about you and your plans for the school year?

V: I want students to feel free to come talk to me about any concern, idea or request they have about anything going on in the school. The second most important thing is to serve the student government members.

We have a lot of people here, and I want to make sure that I serve them well because if the student government as a whole feels empowered to serve the school and work more for the school, then we get more stuff done.

W: It’s really important for students to know that we’re not in any way different than they are at all. Two or three years ago, we were exactly where they are right now.

It’s definitely worth it to approach us and introduce yourselves, and if you have an idea and it seems crazy, or you just have a concern, we would really appreciate it.

2017-05-08
Previous Post: UCCS scholarship guide: what to consider in your application
Next Post: Spring sports wrap up regular season, some move to play-offs