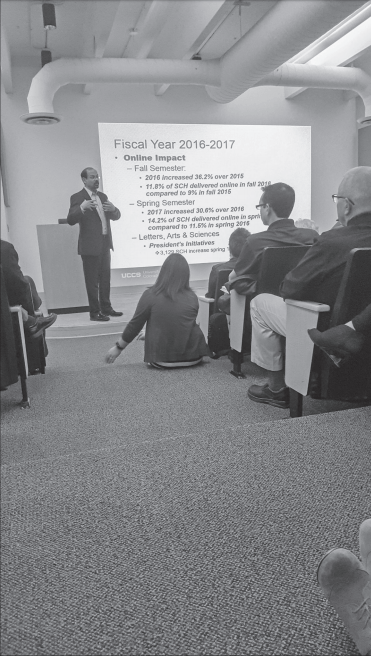 While the search for the next chancellor continues, current administration on campus are working to make a plan for the next academic year.

On March 22, interim Chancellor Venkat Reddy and Susan Szpyrka, vice chancellor for Administration and Finance, presented a discussion for enrollment trends and next year’s budget.

Reddy and Szpyrka presented to a full audience of UCCS faculty and staff, some of whom spread to the floor for lack of seating.

The open chancellor forum covered the past year’s finances, enrollment data and next year’s proposed budget. Reddy acknowledged the work accomplished in the past 15 years by Chancellor emerita Pam Shockley-Zalabak.

“But how do we organize ourselves to grow from here? Strategic planning has to be done, and any financial plans we do need to align with that strategic plan. These should not be independent of each other.”

“This has implications on our budgets, because we are hoping to grow 6.2 (percent) by the whole year, but we didn’t,” he said.

The presentation attributed the growth in student enrollment for this academic year to programs like baseball and lacrosse; the number of intercollegiate athletes grew by 164 students. New degree programs exercise science and inclusive elementary education program both also attracted about 75 students.

Reddy emphasized the growth of online students since 2015. In the fall 2015 semester, 9 percent of student credit hours were delivered online, and this number grew to 11.8 percent in the fall 2016 semester.

The 11.5 percent of hours in online classes during the spring 2016 semester has grown to 14.2 percent this semester.

“That’s a big deal,” said Reddy. “And that number can only increase over time. That means more and more students are getting really comfortable taking online classes, and we’ll see that trend continue.”

Reddy said that it will be important to develop the infrastructure of the university supporting online students, especially as this population continues to grow.

Szpyrka discussed the budget of the current academic year, but it is difficult to determine specific numbers because of issues like students petitioning for in-state residency partway through the academic term.

“It ain’t over until it’s over,” said Szpyrka.

Under House Bill 1319, state support can be granted based on an institution’s performance. Because of this, the CU campuses were allocated additional funds for the 2016-2017 fiscal year, said Szpyrka.

This extra money was put toward increasing the merit pool for employees from 1.6 to 2 percent. Szpyrka said that compensation increases for faculty and staff will not depend on the growth of student enrollment.

“There are many institutions that are concerned about their particular dependency on the international market and how that is shrinking significantly right now,” said Szpyrka.

Budgeting for the 2017- 2018 fiscal year will depend on the state funding UCCS receives.