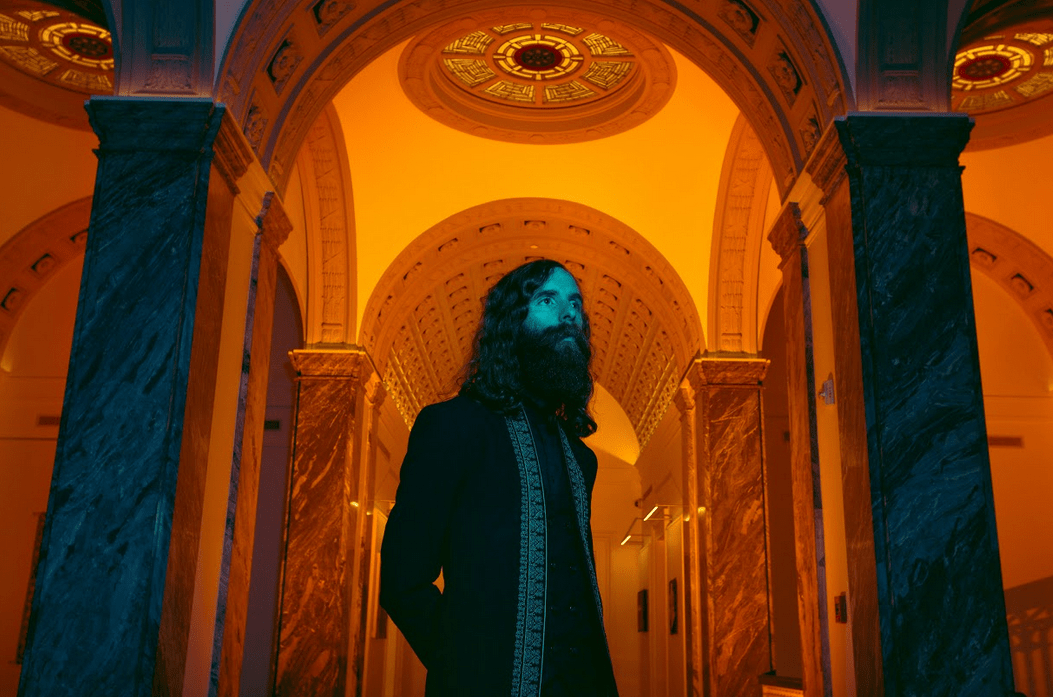 Columbus Ohio based Saintseneca is a folk rock band that has a strong penchant for foreign instrumentation and wordy deadpanned vocals.

The biblical framework that surrounds Saintseneca’s album “Pillar of Na” isn’t force fed but much rather questioned by the strenuous vocal chords of Zac Little.

With so much to say and so little room to speak it, Little effortlessly bends the English language to his liking, adding and subtracting syllables, even if they don’t belong, to finish unmarked thoughts and stories.

Saintseneca approaches every song like a conversation; after each point made clear, Little has something else to say, whether that be his hatred from Bruce Springsteen or the hypocrisy inside his religion.

They are  playing at the Larimer Lounge in Denver Co on Oct 27th. Tickets are $15 at the door.

Little has a lot to say about the art of the music video, as well as hidden themes in his project’s new album.

Has your passion for preaching in churches when you were a teenager affect how you write songs today?

“I used to preach and now I ask questions.”

How does it feel to finally have the track “Pillar of Na” out after perfecting it for 11 years?      “I don’t feel that I perfected it – but it is certainly a release to share something that’s been in the works for so long.”

It always looks like you have a lot of fun in the music videos you put out! What’s the importance of a music video to you?

“The music videos are a labor of love. I look at it as an opportunity to make a big art project – something more interesting than just another piece of marketing content. It’s often super scrappy, DIY and a ton of work, but then you catch yourself in these absurd moments, like flying an illuminated ladder with giant weather balloons, or wandering around a shopping mall with a giant balloon on your head, and you have to laugh at how absurd and wonderful it is to be able to make something.”

You put a lot of thought and arrangement into your lyrics on every Saintseneca song that’s put out. Does this process of creating lyrical content come naturally to you?

“It’s a balance – I’ve written songs since I was 5 or 6 years old. Just silly little jingles and melodies to be funny. So to some extent, writing music and words is something I’ve done as long as I can remember. But to craft something special there is no shortcut. I invest a lot of care, labor and effort into everything – it doesn’t just pour out naturally. It’s a long, sometimes arduous process of realizing a song.”

Your record label ANTI- makes mention to how the topic of memory is weaved throughout your new album “Pillar of Na”. Why did you choose to write about memory?

“I’m interested in memory because I want to know what is true. While writing this record I fell in love with a historian. Seeing how she did her work inspired thought into how we create and perpetuate our collective memories. How closely does the image of the past we collect and project into the present resemble the truth of what took place? We can never really know, but maybe with some investigation we can know a little more.”

What do you find appealing about the sound of a bouzouki? How did you discover this Greek instrument?

“The bouzouki is also a Celtic instrument, which is how I became interested in it. A friend of mine had one and I thought it was a really beautiful and fascinating instrument. Eventually he upgraded to another bouzouki, and actually gave me that very instrument (in exchange for a case of beer). I love the tonal range and droney shimmery rhythmic textures it creates.”

What’s the music scene like in Columbus in Ohio?

What kinds of things does Saintseneca do to stay sane during tour?

“We try to take in nature whenever we can. One sweet part of traveling is the opportunity to see a lot of natural beauty. When we can, we go for hikes, swims or just see the sites. Even ridiculous stuff like a giant gopher sculpture can break the monotony of long drives and bars painted all black every night.”

2018-10-30
Previous Post: You See CS: Motif Jazz Café: for the jazz lovers and classy drinkers
Next Post: Epic Halloween shows and movies on Netflix to feed your addiction