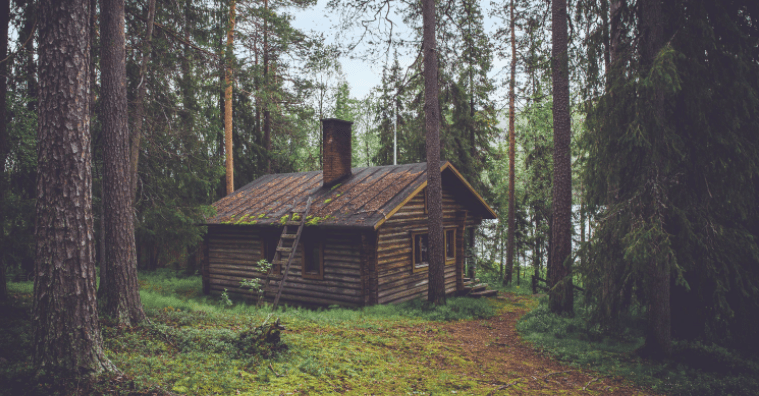 Satire: I escaped civilization — don’t do it

Last year, during the pandemic, I decided to head out into the mountains. I found a cabin on sale at getacabin.com, and moved in. It was a failure. I moved back to Colorado Springs last week. Here is my story and warning to you: don’t try to escape civilization.

It had always been my dream to do this. I always wanted to write a novel and escape my job being an administrative assistant at UCCS. The pandemic presented this opportunity since my job was virtual and I was receiving a load of money from unemployment.

The cabin was desolate in a large, thick forest somewhere in the mountains, west of Colorado Springs. It was located somewhere tucked between two mountains and had a small river behind it. The large pine trees looked beautiful as they swayed slowly in the cool mountain air.

I walked into the cabin for the first time with a smile and an open heart. There was no one around. It felt amazing. The closest cabin was about an hour away, and I met that neighbor once; he also purchased his cabin at getacabin.com.

I was disappointed to find out that it was almost impossible to connect to my internet or have a phone connection there. There was an old technology with the cabin called a “home phone.” I struggled with it because it didn’t allow me to take pictures, text or use any apps; all it had were numbers and a long cord that stopped me from walking around with it. I could only send and receive calls. Ugh!

The closest grocery store to the cabin was two hours away. This was a problem. I ended up purchasing $600 worth of groceries to ensure I did not go back. Twice I forgot to grab toilet paper, causing me to head back to find out that the store was also out of toilet paper. I ended up stealing from several gas stations on the way back.

After about three months of not doing anything, I became extremely lonely. I missed going out for drinks with my friends after work. I got tired of drinking by the river with a couple of squirrels who stole whatever I was snacking on and sometimes my alcohol.

I also never wrote my novel because I had so much to worry about, like mountain lions and bears walking by my cabin. They dug through my trash and looked at me through the window while I was at my desk at my typewriter. It’s tough to write when Death is staring right at you.

And then winter happened.

I couldn’t leave the cabin. I was stuck because the roads froze over, and I couldn’t escape my driveway. I ran out of food 15 days into it. After a day of starving, I was forced to kill a rabbit, despite being vegetarian. I still think about it when I go to sleep some nights; thank God I live ten-minutes away from a Whole Foods now. I planned to come back to society right after that incident.

You may think that you hate people and society, but trust me, if you go out in the wilderness by yourself, you will miss people. Humans are funny. We pretend to hate each other but we all are desperate to find people — desperate to find connections. And we hope that it will last a lifetime.

I’ve decided to start an organization to ensure people don’t make the same mistake that I did. Check it out, it’s called: “DON’T MOVE INTO A CABIN IN THE MIDDLE OF NOWHERE LIKE I DID. STOP! DON’T DO IT.” Abbreviation: DMIACITMONLIDS!DDI.

2021-09-04
Previous Post: COATI to celebrate being a ‘hideout for all’ on one year anniversary
Next Post: Kava shows benefits of herbal medicine