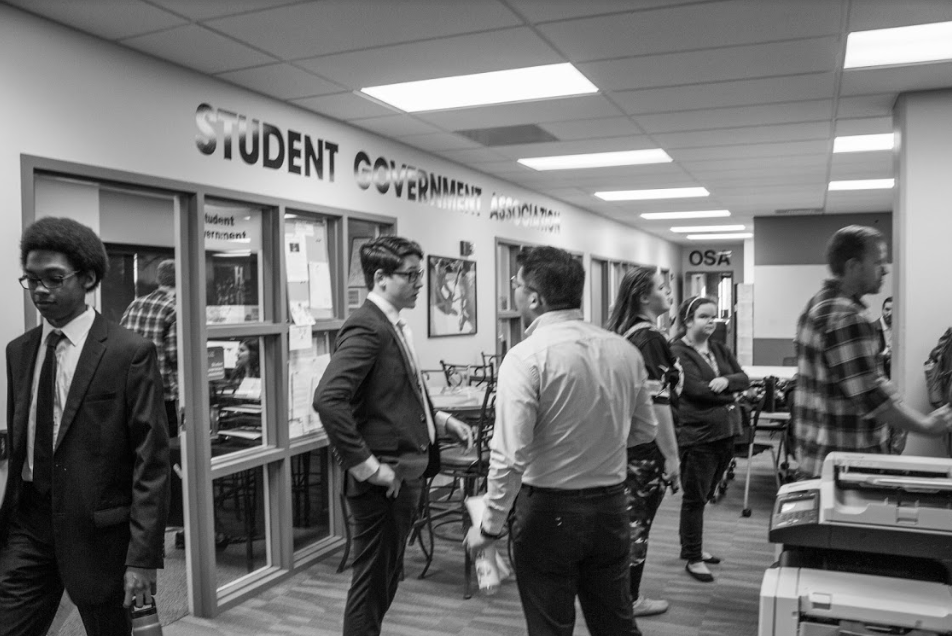 Current members holding office and Student Government Association (SGA) candidates participated in an ice cream social styled event as the last official campaign event before the election. Members currently holding office offered advice to the students who would soon be replacing them at the event.

Many of the candidates in this year’s election are running unopposed.

“You know, I really think that the last two years have been pretty harsh election wise. Some people are afraid of it getting to that point again. It has been intimidating,” said current President Sierra Brown.

“It is a huge time commitment for an unpaid position. I’m sure a lot of people would like to run but could just not commit that much time without payment,” she said.

Brown said that Picadilla and Oke-Thomas have already reached out to Brown and Vice President Laveen Khoshnaw about how the transition will happen.

“I have fully confident in these two. Even though my time in the position is up, there are still important things that we are going to be exploring and that Jay Jay and Phillip are still willing to explore,” said Brown.

“I’ve talked to Sierra about the responsibilities of this position and will continue working on their initiatives,” said Picadilla

Picadilla said that his inexperience in SGA will offer him a fresh perspective for the association.

“I really don’t know any of the drama or the last things that went badly,” said Picadilla. “So those things can’t sway me. I am going to do what I think is best.”

Picadilla has big plans about getting student participation back up for SGA and believes that the future of SGA is the incoming freshman class.

“The best thing that we can do is make sure that we are making a welcoming and inclusive environment. I really want to focus on the freshman coming in this year. We want them to come in with their fresh eyes and new ideas,” he said. “I’m really thankful and excited for this opportunity. And I want students to just have an amazing experience at UCCS and I want them to understand that we are here for them.”

The candidate for Senator of Multicultural Affairs, Alexandra Ruiz, was also at the event. She is currently running for the only contested position and was actively campaigning at the event.

Ruiz hopes to be more present and in contact with all of multicultural groups on campus.

“I know that there are a lot of students who feel like in the past the Senator of Multicultural Affairs has not been very involved in their clubs. The position has not been very visible,” said Ruiz. “There seems to be a disconnect between the cultural clubs on campus.”

Ruiz said that she hopes to be a senator that all clubs feel comfortable and familiar with.

“I would be doing this kind of work anyways. Whether I get it or not, I want students to know I will be there for them. I just think that the SGA platform will give me an opportunity to have more access to the various groups and empower our people,” she said.

“On other campuses, usually engineer [students] have a website where they can see what the undergrads and grads are doing as far as research. I would like to see UCCS engineering research available on Mountain Lion Connect,” said Afriyie.

As a mechanical engineering student himself, Afriyie thinks that engineers need a voice on campus.

“As students, we need to be creative and have fun. If we don’t like how things are at UCCS, it’s our job to change the culture,” he said.

Afriyie expects student participation to be his biggest challenge next year, he stated, “Engineers stay in their own bubbles. So getting people excited about what I am trying to do is going to be hard.”

Afriyie plans to work with professors to help him increase student participation.