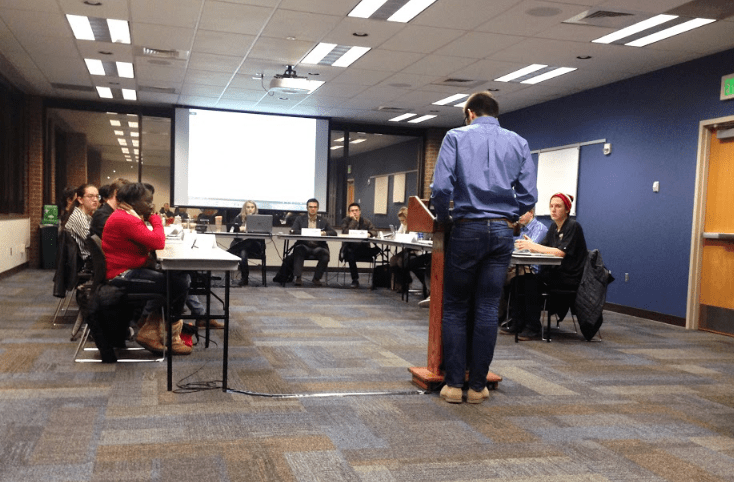 SGA to hold impeachment hearing for removal of sustainability senator

Chocolate chip cookies were passed around at the Nov. 17 senate meeting as Student Government Association members voted to move forward with an impeachment hearing for former justice, Devon Johnson and senator of sustainability, Jeremy Nelson.

After several club funding requests and senate bills were passed, Christian Fazel, senator of graduate school stood in front of 14 student senators to bring forth articles of impeachment against Johnson and Nelson, which passed with a majority vote after an hour-long discussion.

To run for the upcoming SGA elections, Johnson resigned from his SGA position on Dec. 3, but a hearing will still occur for Nelson on Dec. 8 at 7:30 p.m., where the senate, the same SGA body who voted for the impeachment process to continue, will also vote to decide if he should be removed from office.

According to Fazel, an incident between Johnson, Nelson and SGA vice president Tamara Marshall was cited as evidence for violating SGA bylaws, the SGA Constitution and the UCCS Campus Policy. Fazel was not present at the incident, but was informed of the occurrence by director of finance, Joseph Conrad.

Although the exact conversation, date and time of the incident are unknown by the students who were present, Fazel said that Marshall was trying to get work done in the SGA office when Johnson and Nelson allegedly forced her to state her political beliefs with physical intimidation against her own will.

“Once those questions were answered, they proceeded to put her on a political spectrum and berate and undermine (her) political view,” Fazel explained to the senate.

“I have heard from other students that the word ‘fear’ was used. She was afraid to not answer these questions.”

Johnson said that no students or SGA members at the event remember what was said or what happened.

Fazel said that both members accused violated the Preamble, Article II sections A, B, C and D of the SGA Constitution, the CU Board of Regents policies and that Johnson also violated Article III, section five of the Judicial Board Bylaws for missing several required meetings without a valid excuse this semester.

Before the November meeting, Fazel brought the situation to members of Rules and Organization Committee and executive council to seek advice on the next best step; it was agreed that this situation needed to be voted on by the senate before initiating a conversation with Johnson or Nelson, according to Fazel.

“If there are misunderstandings or a little friction, more often than not it’s ‘hey, let’s sit parties down in a room, talk this out and figure it out.’ (But) this was more of a ‘we don’t think we can sit these people down and work this out,’” he said.

“If I were to do it again, I would probably talk to them and get their side of their story, I would still bring it to senate no matter what, just because I feel like it really violated our documents.”

Nelson posed the question to Fazel at the senate meeting to ask if anyone had informed him or Johnson of how Marshall felt after the incident since they were not aware of the articles of impeachment until two hours before the meeting.

“Were myself or (Johnson) approached about this by either by (Samuel Elliott) or (Marshall) or anyone else that felt there was misconduct?” Nelson asked.

The Dec. 8 hearing will consist of Nelson, the senate and be presided over by the Judicial Board chief justice, Sierra Brown. Nelson will be allowed a due process, in which he can give his side of the case and bring witnesses to the stand.

The main incident was also reported to the Office of Institutional Equity (OIE) by Fazel and SGA adviser and director of Student Clubs and Organizations Sabrina Wienholtz.

Marshall, who did not wish to comment on the impeachment hearing after the senate meeting, was asked by senate on Nov. 17 if she used the word fear when she described the situation to Fazel.

“I did not feel threatened but I was very much afraid to answer questions. I’m aware that my (political) views are probably not popular,” Marshall said.

Johnson and Nelson each spoke to the senate before the articles of impeachment to be adopted passed with 10 votes for Johnson and nine for Nelson.

Johnson and Nelson expressed their disbelief to SGA members as each gave their side to the story.

“I’m absolutely shocked that this is going through. A little background on me is that I’ve actually been forced into this situation myself,” Nelson said at the Nov. 17 meeting.

“When it comes to views, I do not push upon people, I do not force people to give their views. I do remember that discussion and I felt that it was a safe space to have political conversations all the time.”

Johnson does not see the evidence as a strong case against himself or Nelson, as the person who presented the evidence was not present at the incident, according to Johnson.

“If you consider the nature of this, it is all hearsay,” said Johnson.

“What it came down to was, (Nelson) kind of got drug along. I think he was honestly just there and they needed to get me for this so he just got drug in.”

Since this senate meeting, Johnson, justice Patrick Calhoun and SGA president Elliott have met separately with Chancellor Pamela Shockley-Zalabak and legal experts to inquire if SGA has the right to move forward with the impeachment hearing.

On Nov. 22, Shockley-Zalabak sent an email to Calhoun, who resigned from his position as a justice on Dec. 2 to run as vice president with Johnson in the SGA elections.

“Upon inquiry, I understand staff have been in touch with SGA members, including yourself, regarding rules of impeachment, specifically that impeachment cannot be on the basis of harassment,” she said in an email sent to Calhoun.

According to Brown, chief justice, the articles of impeachment voted on by the senate in November were presented as a violation of the UCCS Campus Policy, which can only be investigated by the OIE.

“What the OIE does has nothing to do with SGA, we won’t know anything about their process,” said Brown.

“Because of the words saying harassing and bullying (at the senate meeting), that is something that cannot be handled under the jurisdiction of SGA.”

While the senate does not have plans to address the situation regarding the campus policy in the future, they will move forward with the impeachment hearing due to the SGA Constitution being violated by Nelson.

Since Johnson submitted his resignation from office on Dec. 3, he is not required to attend the Dec. 8 hearing, but is able to take back his resignation within five days.

According to Jacob Hopkins, speaker of the senate, it is unlikely that Nelson will be removed from office after the hearing.

“Given the evidence that’s against (Nelson), it would be extremely unlikely that he would be removed. As he has used professional behavior and has gone about this with a professional manner,” Hopkins said.

“He’s done well enough that I believe within the hearing he will probably not be removed.”

Hopkins and Fazel said that Johnson’s behavior has been systemic over time and has been addressed before.

“This was behavior that I had seen first hand from within the office, I had received emails of complaints from senators regarding his behavior from committee meetings,” Hopkins said.

“Our intention as executive council is that this would be a wake up call. We already had an official, ‘you better tone it down’ letter given to (Johnson) by the chief justice. We have met with (Johnson) several times to say ‘your behavior is unacceptable, please amend it.’ Yet, that fell on deaf ears.”

Hopkins, who is a member of executive council, believes bringing forth the articles of impeachment against Johnson and Nelson was the best option.

In Johnson and Calhoun’s resignation letters, each stated that they believe this was an abuse of power by SGA.

Johnson and Hopkins both said that some senators are looking to resign after this situation.

“We should not be tearing each other a part for political games. There’s some obvious neglect or abuse of their office or title. We shouldn’t just impeach people because they broke a rule,” Johnson said.

“What if we actually talked to somebody? If you’re going to say something that’s so derogatory to my character, at least get some proof. The reason they’re doing it is because they’re mean. There are senators who want to quit. This is ugly, this is nasty, this is not what I signed up for.”

Hopkins said that he has had to fight against conduct concerns among SGA members in senate meetings the entire semester.

“Who watches the watchmen who guards the guardians? We have to make sure we are watching ourselves and behaving within the senate,” Hopkins said.

Elliott, student body president, hopes that the impeachment process will not take away from the impact he believes SGA has made this semester.

“My opinion is that anyone who gets in the way of official student government business and is hurting the organization as it tries to serve students should be looked at for impeachment,” said Elliott.

“I am not the the person to judge whether either one of these individuals should be impeached.”

Following his resignation, Johnson said he will also petition for a recall of Fazel. A recall requires signatures of 50 percent the amount of students who voted in the last student election.

The SGA Constitution, bylaws and a transcript from the Nov. 17 senate meeting and other documents can be downloaded from SGA’s Mountain Lion Connect page under files.

The impeachment hearing will take place on Dec. 8 at 7:30 p.m. in University Center 303 (third floor). The hearing is open to the public.