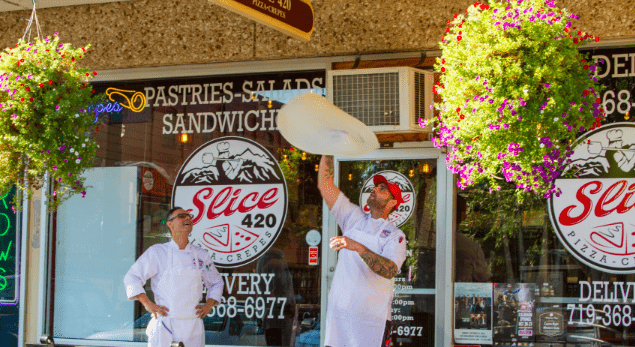 Slice 420: a local business with an inspiring backstory

By: Devon Williams
In: Culture

In 1981, Colorado had its  second medical marijuana passed into law, but it had required patients to obtain it from the federal government.

Then in 2000, Colorado voters approved Amendment 20, which was the second attempt for legal marijuana. This made Colorado the first state to legalize marijuana in its state constitution, according to learnaboutmarijuanawa.org.

Medical marijuana uses the plant and it’s chemicals to treat diseases and conditions. The marijuana plant contains more than 100 different chemicals called cannabinoids, each with a different effect.

The two main chemicals that are used in medicine are Delta-9-tetrahydrocannabinol (THC) and cannabidiol (CBD).

Some conditions and diseases medical marijuana can be used for Alzheimer’s disease, Cancer, eating disorders, mental health conditions such as post traumatic stress disorder and muscle spasms according to WebMD.

The medical marijuana patient registry on colorado.gov shows the average  amount of patients in 2017, was 88,417.

Slice 420, located in Old Colorado City, has a story that shows how medical marijuana can affect a whole family.

According to the Slice 420 Facebook site, Christian and Stefany created a family; one of which experienced a great deal of stress by having a daughter who was diagnosed with Cerebral Palsy after six weeks of being born. Her name is Sofia. She also had epilepsy and was suffering up to 100 seizures a day.

After many years of trying many medicines, the family decided to move to Colorado and sell the family pizza place in Florida in order to gain legal access to cannabis in Colorado.

After the move to Colorado Springs, they met current business partner Olivier LeHeux who is from Paris, France and is a locally renowned chef as well as a former business owner.

Slice 420 says on their website that “We DO NOT sell infused foods, but instead, we hope to use our business as a platform to grow awareness of the benefits of cannabis, to reduce the stigma associated with marijuana and its medical benefits and to give hope to other families were often they feel there is none to be found.”