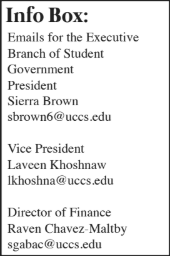 “I haven’t run into anything that’s been surprising to me, where it felt like there was some huge obstacle or curve ball I’ve had to overcome so far,” said Student Body President, Sierra Brown.

Vice President, Laveen Khoshnaw, agrees, saying that the internal workings have been smooth.

“Student government starts, as with any start in a new position that involves learning processes, can be difficult,” says Khoshnaw, adding that the senate has picked up on the procedures smoothly.

According to Khoshnaw, the Student Government Association went through a training retreat the weekend before school started.

“We essentially spent most of our first day doing viewpoint neutrality and sexual harassment training,” said Khoshnaw. During the retreat, members of the Student Government Association did team building exercises to build familiarity between everyone.

“I started when I was a freshman, so I’ve seen how student government has been functioning,” says Khoshnaw.

Khoshnaw says that normally the executive branch begins to drift apart, but that she, Brown, and Director of Finance Raven Chavez-Maltby have worked closely together and have great communicating, saying that their level of communication is quality.

“I think that our previous experience in student government seeing the different leadership teams, being on leadership ourselves, has really made this process a lot easier for us internally,” says Brown.

According to Brown, the Student Government Association has received questions about the retention rate for members.

“The reality of the situation is like, for one, we can’t please everyone,” says Brown. She adds that members might leave because of conflict or any other reason. “So far this year [conflict] hasn’t been stated as a reason to us for why they’re leaving.”

Brown says that resignations received this year have been very forthcoming and honest.

“It’s really just time commitment issues, people don’t realize how much work can go into being in student government with any position that you’re in.”

Brown says that she values being a student first over campus civic engagement, understanding the need for people to put their education before their obligation to civics of university life.

“We’re definitely doing our best,” says Chavez-Maltby. “We don’t have a full governing body so we’re working to the best of our abilities.” He says that the executive branch’s goals can be met with a full Senate and Judiciary Board.

This year is the first term that Chavez-Maltby has worked for the Student Government Association. As Director of Finance, Chavez-Maltby works directly with clubs and organizations during the funding process as the person of contact for all questions or concerns. He says that he’s heard about 10 proposals this year with nine of them passing.

“My goal is to work directly with clubs and organizations and bring the feeling of inclusivity[sic] to the campus, because that’s kinda what this year’s motto is,” said Chavez-Maltby. “Every effort I’m making goes toward that.”

As Director of Finance, Chavez-Maltby makes sure that documentation matches his standards before it even sees the Budget Advisory Committee (BAC). He is the chairman for the BAC, which is the first committee that evaluates funding proposals for UCCS clubs and organizations. After the proposals leave the BAC, they are sent to the Senate, and if approved by the Senate goes to the university administration.

Chavez-Maltby wants the funding process to be more transparent.

Chavez-Maltby says that the hardest proposal he has considered was incomplete, lacking necessary requirements for consideration by the BAC.

“About 30 percent of the proposals I get I have to defer it a week and work with the student directly to sort out all of the problems,” says Chavez-Maltby.

“Last year’s student government ran out of money for student clubs and organizations, and my goal this is is to avoid bankruptcy,” says Chavez-Maltby.

Brown, Khoshnaw, and Chavez-Maltby share goals in making sure that students at UCCS have the ability to participate and not be excluded.

Brown says her focus is on an inclusiveness initiative focusing on social and academic empowerment.

Khoshnaw says that freshman are always the most difficult to engage civically at UCCS.

“They just don’t feel comfortable where they’re at yet, so being able to let them know we have an open door puts them on the same level as us,” says Khoshnaw.

Chavez-Maltby tells everyone about student government, letting them know he’s always available to answer questions and concerns, where he tries to get back to emails within 24 hours.

“Personally, I’ve been really excited to start the Women’s Student Association Initiative,” says Khoshnaw. She says that the Women’s Student Association would allow women students, staff, and faculty mutually empower each other both professionally and socially with plans for a dinner that will be completely open to the public. Khoshnaw says that it’s like a sorority without the exclusivity and anxiety of trying to fit into a group.

Chavez-Malty says that club sports proposals have been the most memorable to him because the ability to ask the governing body for funds to guarantee that your team can participate is vital.

“I think university is a time to really develop yourself, and a lot of the time students don’t know who they are completely, and a club is a really good way to develop yourself and your network of friends,” says Chavez-Maltby.

All three members of the executive branch want any student with a concern to reach out to them by dropping into their office or emailing them.