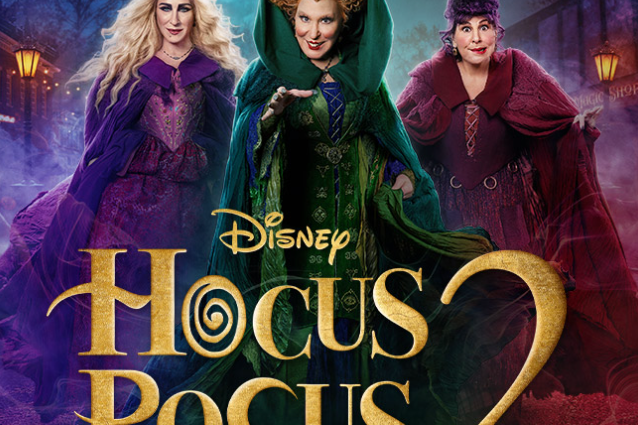 By: TJ Cantonwine
In: Features

Since 1993, the Sanderson sisters have awaited their revenge on Salem, for someone to once again light the black flame and resurrect them. That day has finally come 29 years later in the new “Hocus Pocus 2,” a long overdue sequel to its brilliant, quirky original that explores the sisters’ relationship and origin.

As silly and despicable as the sisters were in the first film, the audience did not get a backstory or villain arc — until now. In the recently released sequel, young Winifred — masterfully played by upcoming actress Taylor Paige Henderson (“Earwig and the Witch”) — is depicted as an independent young lady unfazed by the harsh treatment of her village, until it interferes with her sisters. Winifred swears revenge on the town, sealing her and her sisters’ fate as the most infamous coven: the Sanderson sisters.

In present day Salem, Becca (Whitney Peak), an introverted spiritualist with a yearly Halloween ritual, looks to reignite her friendship with Cassie (Lilia Buckingham), together with quirky best friend Izzy (Belissa Escobedo). Much like the first movie, the human plot of the story is less entertaining.

Together the friends accidentally re-conjure the Sanderson sisters in a beautiful buildup of classic Disney movie climax, and the sisters are woven into the mysteries of a leap in time and the vengeance they swore on Salem. The sisters are hungry for power and seek the forbidden spell “magicae maxima.”

The arc creatively helped the audience feel the intensity of the witches and still lean in curiously for their hilarious and magical dynamic. In this appearance, the audience can enjoy a wicked song introducing their playful, sinister nature with the “The Witches Are Back” original performed by the actresses, allowing us to relive their rendition of “I Put a Spell on You” in the 1993 movie.

Nostalgia is not all the film has going for it. The storytelling was smooth and although the teenage characters are written with modern tropes, the charm is within their naïve human nature.

The story makes many nods to the original and develops the lore further, which is exactly what fans wanted. The special part of the film is its commentary on the witch trials and their cruel treatment of women, and the complexity of human connection that drives us away from our true selves.

Seeing the witches themselves develop and learn gave a new taste of the characters without ruining their charm. The continuity was spot on, and the fresh material was engaging. The young actresses that played the teenage protagonists did a wonderful job with their sappy characters, yet the true stars are, of course, the Sanderson sisters.

Fans long awaited the trio’s return. In 2017, Midler was worried about the possibility that she couldn’t reprise her character. The movie finally went into production in 2019 and the director was Anne Fletcher for the sequel. The deal was sealed.

The camera work and overall production stood out during times of tension and magic, of course at the hand of Disney’s spectacular camera and special VFX crews. The objective viewing experience suggests that the movie was made with a healthy passion.

Despite critical reviews, “Hocus Pocus 2” is a creative comeback for classic characters that have a heavy fanbase within Gen Z and millennials. It’s a perfect movie for comfort, with a sweet conclusion that suggests a further continuation. The topics and ethical questions from the movie are timeless and worth engaging in.

Bringing back memories for me, the movie fulfilled a curiosity that the original 1993 movie planted about whether the Sanderson sisters would ever rise again.