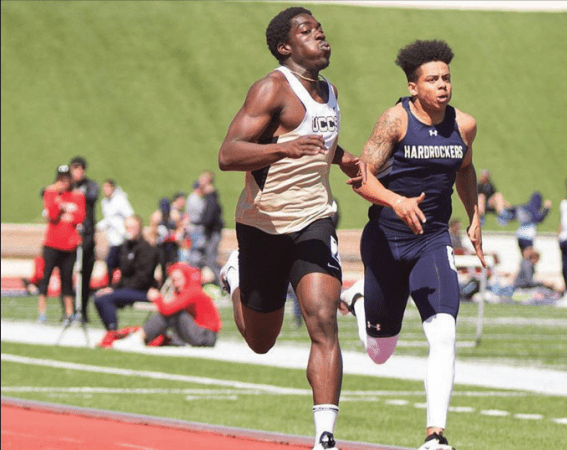 By: Gabbie Matl
In: Sports & Recreation

The track and field program has been hitting its stride as the men’s and women’s teams compete in their outdoor season.

The team’s outdoor season started on April 2 at the CSU Pueblo Invitational. So far, they have had six meets, including the Mt. Sac Relays on April 14 and Long Beach Invitational on April 15, both of which were national competitions.

The team has one meet, the Pre-Conference Meet in Golden, Colo. on April 22, until the RMAC Championships on May 7-8 in Gunnison, Colo., and three meets to go before the NCAA Division II Championships May 25-27 in Bradenton, Fla.

Meanwhile, athletes from both the men and women’s teams are earning provisional marks while improving their times and distances. The team had athletes place at almost every meet they’ve competed in so far.

Sophomore middle distance runner William Mayhew ran a time of 1:51.88 in the 800 meter at the Long Beach Invitational, just under the qualifying time of 1:52.33.

Freshman distance runner Kayla Wooten ran a 4:27.11 in the 1500 meter as well, dropping 10 seconds from her best, and is now ranked third in the country.

Sophomore Molly Klotz also earned a provisional qualifying time of 2:13.18 in the 800 meter.

At the West Texas A&M Classic held on April 7-8, freshman Will Ross placed second with a provisional distance of 14.90 meters in the triple jump.

In the women’s heptathlon at the A&M Classic, freshman multi events athlete Andi Harrelson earned first place in the high jump with a distance of 1.40 meters and the javelin with a distance of 40.48 meters. She earned ninth place overall.

Redshirt freshman jumper and sprinter DeShon Elcock has made some notable appearances in both sprinting and field events.

At the A&M Classic, he had a career best time in the 100 meter, crossing the finish line with a time of 10.89 seconds. He also tied for fifth with freshman teammate Derek Valdez, with each clearing 1.96 meters in the high jump.

Both Harrelson and Elcock said that competing outdoors has been a better experience, even with new elements such as inclement weather and high winds to contend with.

“The problem I have with (the indoor season) is that I have really long strides since the tracks are half the size of those outdoor. When I’m running the 100 or 200 meter, there were more curves, so I couldn’t run at full speed if I wanted to stay in my lane,” said Elcock.

More events were added to the meets as well, including field events such as javelin.

“During the indoor season, I went down to five events (from seven), and the events I competed in weren’t really my strongest ones, so it was great to work on those. It was a building process,” said Harrelson.

The new events have created opportunities for many athletes to capitalize on.

“I can actually do the events that I’m best at now,” said Elcock.

2017-04-23
Previous Post: 10 instructors under review for tenure, evaluation process
Next Post: Eating healthy doesn’t have to be painful: tasty recipes to try this week