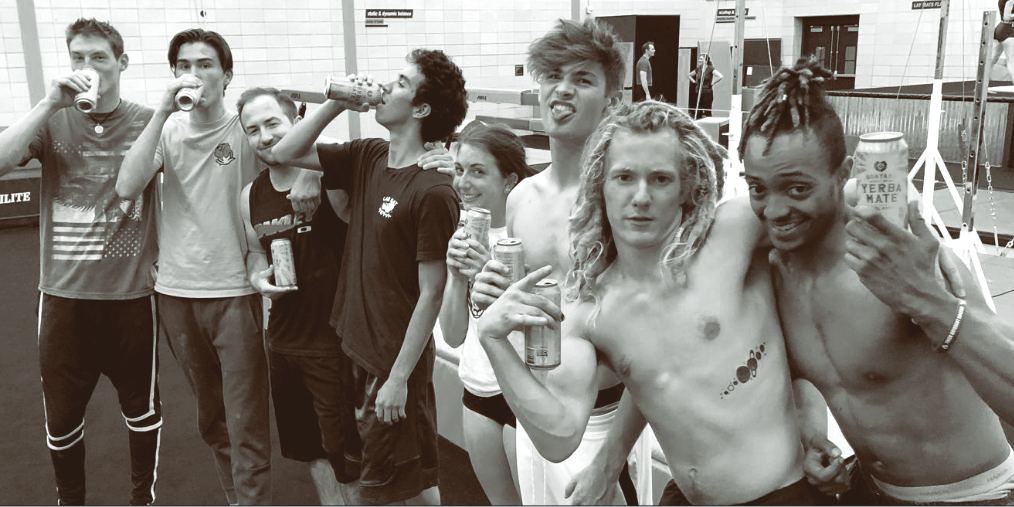 “[I] started watching YouTube videos to kind of try to mimic movement and kind of copy the style and I remember specifically watching somebody drop across like this really big gap and land on a railing and I was just like ‘that is amazing.’”

Parkour, tumbling and tricking have been a part of Matt Hadley’s life since he was 11 years old.

“I was like 12 when I first started taking it seriously,” said Hadley, a business information system major who will be graduating in December.

“[I] started watching YouTube videos to kind of try to mimic movement and kind of copy the style and I remember specifically watching somebody drop across like this really big gap and land on a railing and I was just like ‘that is amazing.’”

Hadley started coaching parkour at a gym and branched into basic gymnastics and tumbling. His experience at the gym became central to his motivation to start the club.

“I coached my first summer camps when I was 14 and then after that summer — I turned 15 during that summer — came on as a regular coach right after that,” said Hadley. “I’ve been coaching since I was 15, it’s been about six years now and it’s been awesome.”

Hadley has been invested in tricking and tumbling for so long that he decided to start the tumbling and tricking club at UCCS in the fall of 2018.

Hadley said that the club started initially as the urban club, with the club’s purpose to bring together all sorts of urban movement.

“(There was) break dancing and parkour and tricking and tumbling and even skateboarding,” said Hadley. “It was just kind of like a hodgepodge of street activities that were thrown together but that didn’t really gain a lot of traction and then I kind of narrowed it down.”

The lack of focus made it so that parts of the club were not happy, so Hadley narrowed the club’s focus to improve the group experience.

The tumbling club has 13 members. Hadley said about seven or eight members are usually at open gyms hosted by Flipshack Gymnastic Fitness Center on Tuesdays and Thursdays.

“[The goal of the club is] to kind of bring people together that have that similar interest and that similar background,” said Hadley. “It’s not meant to be an educational thing, but it definitely has that element to it. People do want to learn but really only the people who are self-motivated are the ones that really stick around and that usually is people with past experience.”

Recruitment is not a primary goal for Hadley because the club does not benefit from having more members just to have members. The club is there to build a network of people who are looking for an atmosphere relevant to their interests.

“That’s kind of what I tell people, if you have experience and you’re interested in keeping up with it or you’re really passionate about learning, this is a great place to meet those people and it’s a good spot to be,” said Hadley. “But if you’re just like ‘oh yeah bouncing on a trampoline sounds fun,’ then it’s probably not for you.”

Hadley said he wants the club to survive his graduation. He started a tumbling club in high school with his brother, but the club failed to gain traction and died out after both Hadley and his brother graduated.

“I’d love for the tumbling and tricking club at UCCS to continue on just in some form, so I’ve definitely been looking for a replacement or some sort of protégé to come and take the mantle,” said Hadley with a grin.