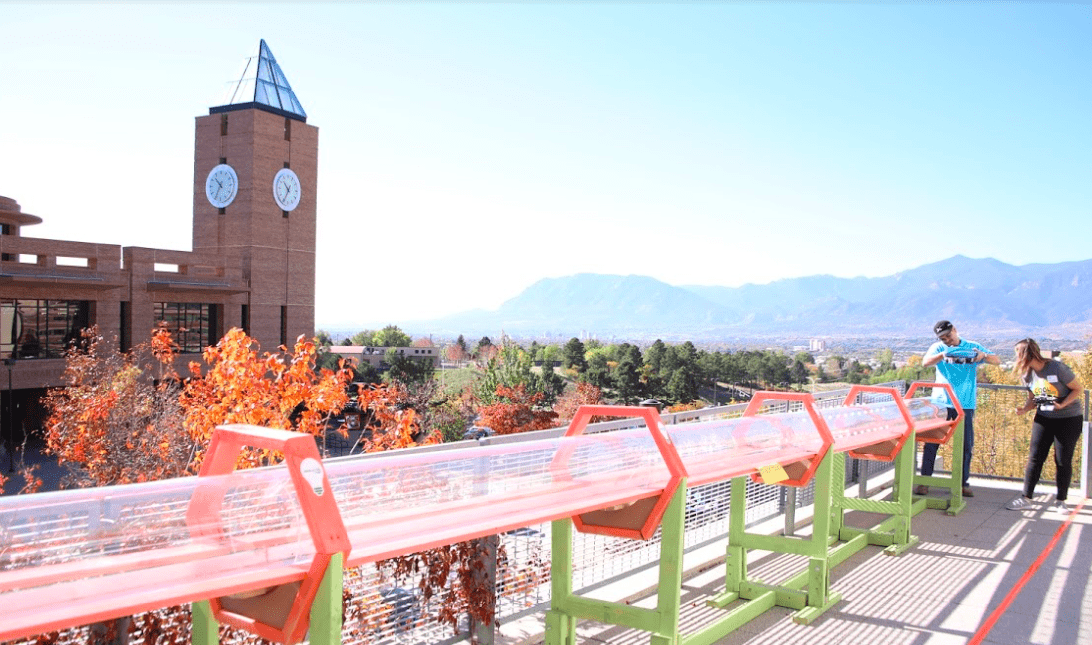 What if you could travel from Colorado Springs to Denver in just nine minutes? Travelling on a hyperloop, students, faculty and staff may have that ability.

HyperFalcos, a team of UCCS and Air Force Academy students, is preparing to compete in the SpaceX 2018 Hyperloop Pod Competition. This is the third year that the HyperFalcos will participate.

A hyperloop is a proposed high-speed transportation system that consists of pods propelled through vacuum-sealed tubes. Engineers around the world are working to create a large-scale hyperloop capable of transporting passengers and cargo.

HyperFalcos members are working to modify their previous designs to compete this year. According to team captain Nick Autobee, this year’s competition has a new focus.

“This year, they introduced that all pods must have their own propulsion, and basically, they are looking for the fastest speed reached in the tube without crashing,” said Autobee, a junior electrical engineering major.

“(With) our pod, we are attempting to do both of those things: to achieve a very high speed and to do so safely without crashing.”

The team finds the competition challenging because hyperloop technology is so new, according to physics assistant research professor Dario Bueno-Bacques, a faculty adviser for HyperFalcos.

“It’s not easy to create. The challenges here are really important ones.”

In their first year of competing, the HyperFalcos presented their hyperloop design in the finals, but they only reached the semi-finals in the most recent competition. They hope they make it to the finals again at this year’s SpaceX and present their design in person.

“We got selected as semi-finalists to present in front of SpaceX via Skype. But we couldn’t make it to the final competition because our design was not mature enough; we still had to do some testing, and we didn’t have enough time to build,” said Monica Azema, systems lead for HyperFalcos.

Azema, who is pursuing her master’s degree in mechanical and aerospace engineering, said that HyperFalcos’ current main goal is to optimize their design.

A hyperloop may come to Colorado via Hyperloop One, a California-based company dedicated to building full-scale hyperloops.

The company announced in September that the Front Range was selected as a one of the next hyperloop routes that would stretch from Pueblo to Cheyenne, with stops in both Colorado Springs and Denver.

According to the Hyperloop One website, if the system is built, passengers could be able to travel from Cheyenne to Pueblo in just 20 minutes.

“They are planning to build one of the first tracks within the (United States) that will actually connect Denver with the south of the state,” said Bueno-Bacques.

“It is a huge revolution that is starting and gaining momentum.”

Elon Musk, CEO of SpaceX, started the Hyperloop Pod Competition in 2015 to encourage innovation among college students and to advance hyperloop technology. Teams from all over the world have participated.

HyperFalcos believes that by participating in this competition, they are helping to create hyperloop technology.

“There are many companies working on this. Therefore, what SpaceX is pulling together for the students is great; it’s a really, really amazing thing because all of these students can get involved with this new technology,” said Bueno-Bacques.

For the HyperFalcos, the Hyperloop Pod Competition is an opportunity to innovate and collaborate with other like-minded students while gaining skills that will help them professionally.

“For me, it’s a really big interest in SpaceX and the aerospace industry, and this is a really great way to bring UCCS students together in that effort in the competition to foster innovation and collaboration.”

Azema says the competition is an opportunity to hone her skills.

“I am a technology enthusiast, especially aerospace technology. Having a design and working with vacuum conditions was challenging for me. It is like space engineering applied on earth. For me, that was the interesting part,” she said.

HyperFalcos also has a separate club on campus. The club is designed for students who are interested in hyperloop technology and who want to help educate the public. There is no set meeting time or place for their club.