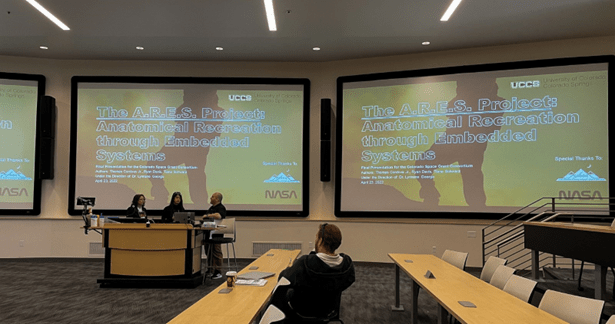 By: Luci Schwarz
In: News

Space technology is a growing field in Colorado Springs, with the U.S. Space Force inducting the CU system into its university partnership program in August 2021 and basing many operations in the state. Research opportunities have expanded for students, including at UCCS.

A UCCS undergraduate research team presented the ARES Project and won a $500 prize at the Colorado Space Grant Consortium’s annual symposium at CU Boulder on April 23.

The ARES Project, which stands for Anatomical Recreation through Embedded Systems, featured a prototype to test the implementation of Inertial Measurement Units sensors for spacesuit design and evaluate loading conditions on the surface of Mars.

They were the only team in their session to bring a live demonstration of a working device. Davis, the technology lead, said the team built it from scratch so the “engineers could get familiar with the systems and become more hands-on with their work.”

This prototype was important to their study, which sought to determine the feasibility of IMUs as wearables for off-planet implementation and proved that users could gather reliable data from a single sensor on each portion of a person’s arm.

Cordova explained the data to the panel judges and noted the requirements, failures and adjustments the team would likely make. Cordova said that the “testing showed excellent data collection from all sensors,” especially after they switched to using an Arduino Nano controller because of its “smaller form factor and additional processing speed.”

The previous year’s team passed down the Wearables Quest project after COVID-19 limited their results.

However, this year’s students were able to test their prototype on a subject and gather sensor data that users could utilize to obtain loading conditions and positions. Schwarz said that this evaluation would “be used to prevent catastrophic events of injury during interplanetary manned missions to space.”

The ARES Project’s final prototype design implemented an Arduino Nano controller, three IMU sensors, a piezoelectric speaker for audible feedback and calibration of the system, a MicroSD card and reader and a power supply of two 18650 Li-ion batteries which would last about 50 hours. Davis said this was “more than enough for testing.”

Twenty-one teams from universities and institutions across Colorado participated in the symposium. COSGC selected teams based on their performance in an event held earlier in April that asked teams to display problem-solving skills in challenges related to “engineering and research, health, operations, cosplay and a myriad of other fields and areas of interest,” according to the COSGC website.

This is the first time UCCS has won a prize at the symposium.