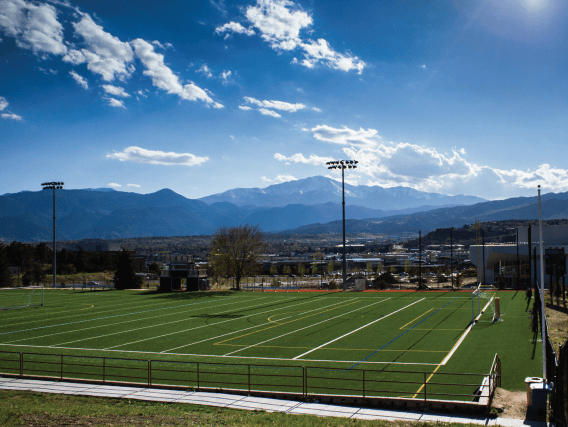 UCCS athletics: When and where sports play on campus

By: Gabbie Matl
In: Culture

Here at UCCS, we have 14 NCAA Division II teams, all of which compete in the Rocky Mountain Athletic Conference.

During the 2016-17 academic year, the Athletic Department expanded their functions, adding two new sports, baseball and lacrosse, along with an expansion of the track and field teams.

Over 100 new students enrolled in these sports among the record breaking enrollment of 12,000 total students at UCCS in the fall 2016 semester.

To help support the newly added men’s baseball and women’s lacrosse teams, along with the expansion of track and field, students voted to pass an Athletic Fee in the spring 2016 student elections.

This fee, which supports all of the DII teams at UCCS, charges students $9 per credit hour.

In addition to financially supporting the teams through tuition and fees, students can attend any UCCS athletic game or event for free.

For students interested in attending a game, here’s a guide to when and where all of the sports compete.

Soccer is a fall sport for both the men and women’s teams.

With a new head coach for the women’s program and a men’s team that went to the second round of playoffs last season, there’s a lot to look forward to this year.

The soccer teams play at Mountain Lion Stadium, which is down the road from the main campus at 5025 North Nevada Ave. They do not play on the Alpine Field, which is located on top of the parking garage.

Women’s volleyball is the only indoor fall sport. The team plays at Gallogly Events Center (not to be confused with the Gallogly Recreation Center), located between the University Center and Dwire Hall on the main part of campus.

They went far into the RMAC tournament last season, falling to Colorado School of Mines in the semifinals in a home game.

Their first home game will be on Sept. 8 against University of Central Oklahoma.

Both teams are highly competitive; last season, the men’s team made it to the first round of the conference playoffs.

The women’s program went even farther, winning the RMAC Championship for the first time in program history and making it to the second round of the NCAA Division II Playoffs.

Students who are basketball fans can go to the men’s and women’s first home game against Chadron State University on Dec. 8 in the Gallogly Events Center.

The women’s lacrosse team was a new addition to the sports department during the last spring season, and they are expected to return with a more experienced roster. They play at the Mountain Lion Stadium.

Their first home game will not be until the spring semester on March 17 against Adams State University.

The women’s softball team will return to play in the spring season after finishing at the No. 10 spot in the RMAC last year. They play at Mountain Lion Field, which is down the road from the main campus near the Mountain Lion Stadium.

The ladies’ first home game will not be until Feb. 24, 2018 against Regis University.

The men’s baseball program was a new team in the athletic department during the last spring season, and they had a successful first year.

Construction is in the works to make them a home field on campus, but currently they play games at Spurgeon Field at 4385 Tutt Blvd.

If you want to catch their first games, be on the lookout for dates in the spring 2018 semester. They will play against Regis University on March 2, 2018.

The men and women’s cross country and track and field teams are highly successful both at the conference and national levels.

Their meets take the teams all over the state and country. At this time they have no stadium on campus.

UCCS has both a men and women’s golf team, both of which compete at a high level.

Last season, the men’s team earned their fourteenth RMAC Championship, with the women’s team finishing at third place in the RMAC.

Similar to the track and field/cross country teams, the golf programs compete in tournaments all over the state and country year-round from the fall to the spring seasons.