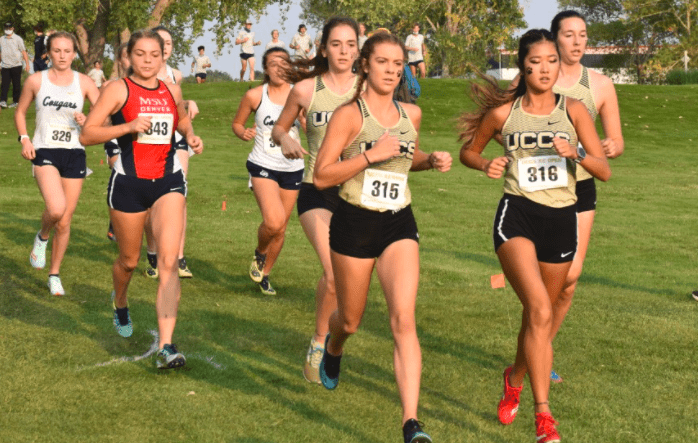 By: Allison Speir
In: Sports & Recreation

Teams were ranked out of the approximately 100 Division II cross country teams that competed this season.

Each week, a representative ranks the top six teams (both men and women) in their conference. These 12 teams from each conference are then ranked nationally to create lists of the top 15 cross country teams in the nation. Other Colorado schools ranked in the top ten of both polls, including Adams State University in Alamosa and Colorado School of Mines in Golden.

According to Meier’s Oct. 26 statement, at the Rocky Mountain Athletic Conference (RMAC) Cross Country Championships on Oct. 24, the women’s cross country team ended in fifth place and the men’s team ended in sixth. At the RMAC Championships, the fastest six men’s and women’s teams as well as the top six runners per race were eligible to move on to compete in the Division II National Invitational Meet.

This national meet was scheduled for Nov. 14 in Lubbock, Texas but was cancelled due to coronavirus restrictions.

Mark Misch, head coach of the men’s cross country team, said that this decision was extremely disheartening, but “it is something we will have to live with because it was a decision made that was out of our control.”

He believes that the men’s team did not get to show what they were capable of as a team  because COVID-19 restrictions left few opportunities for the whole team to compete together.

Misch said, “When we were able to compete at full capacity I think people saw glimpses of what the team was capable of, but the truth is that we never had a meet with our top five guys in the same race other than the first meet of the season and in that meet they perfect-scored the race.”

When the national meet was cancelled, the men’s team ran track races of their own. Misch said that these races had a positive outcome as “several men ran personal bests highlighted by Afewerki Zeru breaking the school record for 5000 m (set by Trent Briney in 2001 – his is in the UCCS Hall of Fame and was an alternate on the 2004 U.S. Olympic team in the marathon). Mark Simmons and Rafael Marmolejo-Daher both ran times in the 10,000 m that were in the top five all-time for UCCS.”

Misch believes this is an indicator of what the men would have been able to accomplish had they been able to race as a full team.

Samuel Nofziger, a senior majoring in mechanical engineering with a minor in general business, has been running on the men’s cross country team for five years. He believes that the men’s team had a successful season because they continued to stay positive and push each other forward even under very unique circumstances.

“It’s really easy to do well when things are going smoothly but what sets our team apart is finding the ability to still be great even when things aren’t ideal,” Nofziger said.

The women’s team also had several accomplishments this season. Head Women’s Cross Country Coach Corey Kubatzky said, “We had three women on the team selected to the RMAC All-Academic First Team: Hannah Ellis, Layla Almasri and Vanessa Roybal. An administrator from each RMAC institution selects 14 student-athletes based on a combination of athletic and academic performance. I think that is a good representation of our team and something we are very proud of.”

Vanessa Roybal, senior majoring in mechanical engineering and a captain in her fifth year on the women’s cross country team, said that she and the rest of the team were extremely disappointed that they did not have the opportunity to compete in the national meet, but regardless there’s still so much to be grateful for. “This season was all about enjoying each other and being able to do the sport we love together, and we still accomplished that goal.”

While being a part of a sports team amid a global pandemic presents many challenges, the men and women’s cross country team had many achievements and successes this season.

2020-12-10
Previous Post: Recourses for those struggling with homelessness and how to help
Next Post: Q&A with equity, diversity and inclusion lead Stephany Rose Spaulding