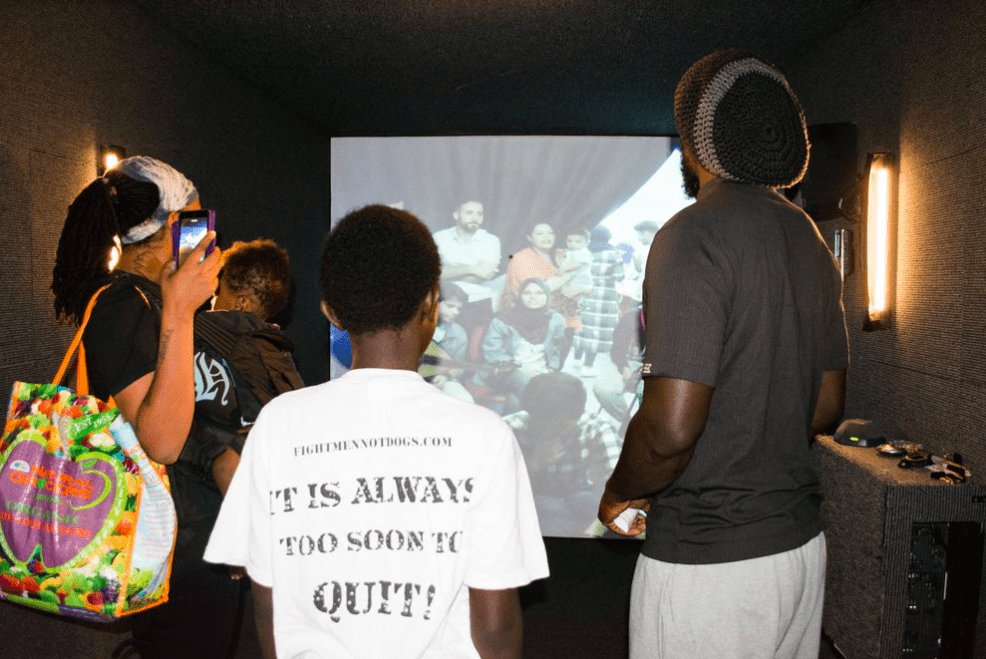 Even if they are thousands of miles apart, students can find something in common with one another, now thanks to the UCCS Portal.

“I walked in, and we happened to be connecting to Gaza, Palestine,” said junior health sciences major Kennedy Watson. “I met a bunch of people from a local community and some college students who told me a little bit about their college.”

Watson met people who had full-ride scholarships to schools outside of Gaza, but were unable to leave.

“That struck me because there are so many opportunities here, and it’s easy to take advantage of most of them, and we forget that sometimes,” she said.

Beginning last week, students had the opportunity to experience other countries and cultures through the UCCS Portal, a gold shipping container that allows students to converse with students and other citizens from all over the world in 20-minute video chat sessions.

Students can schedule sessions with countries such as Myanmar, Iran, Germany and Palestine. Sessions are available until Sept. 23.

Portals exist across the United States and other countries, including Spain, South Korea, Afghanistan and Kenya. The portal, also referred to as the “shipping container,” is located on the shipping dock between the Kraemer Family Library and the University Center.

The Daniel’s Ethics Fund Initiative has sponsored the UCCS Portal alongside Shared Studios and Imagination Celebration, a local organization that seeks to encourage creativity through community collaboration, who paid for the shipping container and helped bring it to campus.

Shared Studios chose countries for the portal based on time zone and the availability of portals in certain countries according to Tracy Gonzalez-Pardon, director of the Daniels Ethics Fund Initiative.

The portal was delivered on Sept. 10. Students were able to begin scheduling sessions on Sept. 11. The portal is the first of its kind at UCCS.

Imagination Celebration paid for the costs of the portal; however, Gonzalez-Pardon said that she was unsure of the portal’s cost.

“We have an agreement with Imagination Celebration and Shared Studios to bring the portal to campus,” said Gonzalez-Pardon.

“The [Daniel’s Ethics Fund Initiative] funds are for opportunities for students to get exposed to ethical issues or how to make ethical decisions. What a great opportunity to talk to other people and learn what they are going through.”

Gonzalez-Pardon said that students have spoken with people of backgrounds that vary differently from their own.

“A lot of people are at refugee camps; one [of the sessions] was in Afghanistan at a university, so students or professors will walk in and have a great conversation,” she said.

Watson, who also serves as the student body vice president, said that her put different cultural experiences into perspective.

“It’s not an everyday thing that you get to step through a door and be face-to-face with someone who could be like you, for all intensive purposes; they have the same age, same gender, you guys were born at the same time, but their life is completely different than anything you can imagine,” said Watson.

Watson spoke with a student who walked 10 miles to her university, alongside others who were studying the same program as her.

“It’s easy for us to overreact on the small things, but there are people that I talked to that don’t have access to clean water,” said Watson, who has had subsequent Skype sessions with the people from her session.

UCCS had the opportunity of installing the portal, which travels among college campuses and other locations, through David Lee, a lecturer in the College of Business. Lee previously worked with Imagination Celebration, who hosted an event with the portal on Sept. 9.

“We talked to them (Imagination Celebration) and decided it would be neat to have it on our campus,” said Gonzalez-Pardon.

The Daniel’s Ethics Fund Initiative has not tracked the total amount of students who have visited the portal; however, Gonzalez-Pardon has seen a large number of students visit the container for sessions.

Blue Leaf von Muller, a freelance photographer and videographers, acted as the curator for the portal.

Student volunteers from the Office of Student Activities, the Student Government Association, the Chancellor’s Leadership Class and MOSAIC attended sessions to help students and answer any questions they may have regarding the portal.

Watson, who also served as a student volunteer, said students would join others who had previously scheduled appointments to peek in.

“The only time you can’t walk into the portal is when there are classes,” she said.

Both Watson and Gonzalez-Pardon said that they have received positive feedback from students regarding the portal.

“I’ve been there when other students have gone in, and people come out beaming,” said Gonzalez-Pardon, who attended a session with people from Los Angeles located next to Skid Row.

“I saw one of the students in the portal with me, and we smiled and waved at each other. I never would have known who she was [without the portal].”

Students can schedule sessions in the UCCS Portal by visiting sharedstudios.com/uccs.