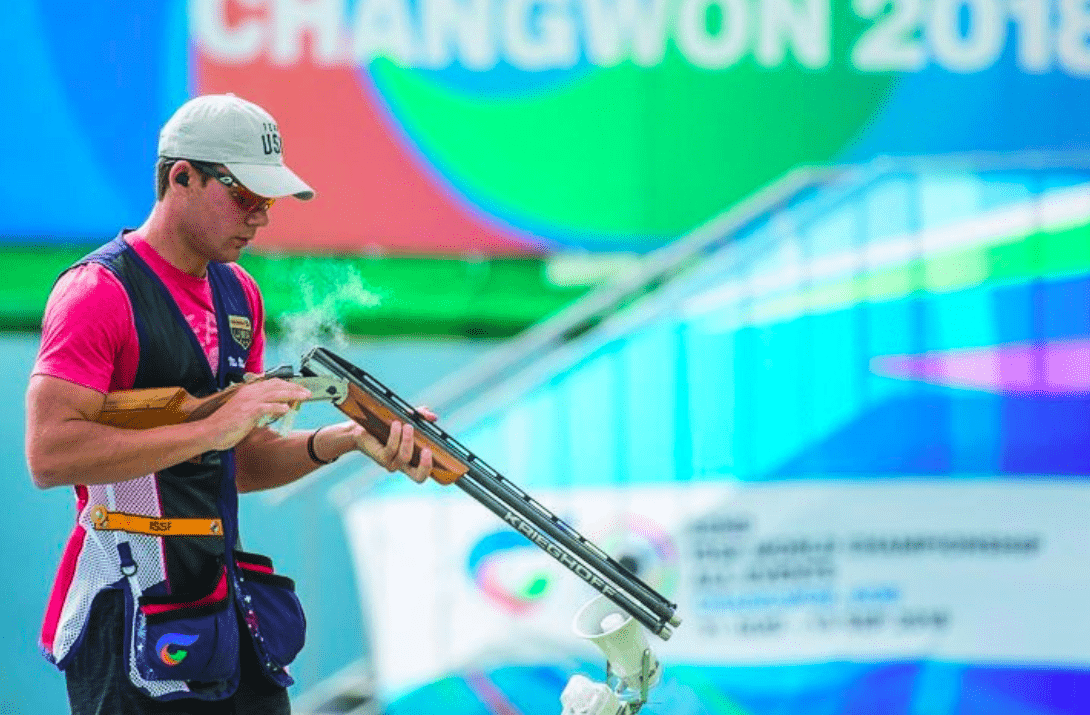 By: Suzanne Seyfi
In: Sports & Recreation

Nic Moschetti, a junior business administration major, competed in the first round of Olympic trials to qualify for Team USA.

Moschetti started competing in competitive skeet shooting after he went to a local shooting range with three friends for his 12th birthday. A stranger had approached him and asked which team he shot for.

“I had no idea what he was talking about,” said Moschetti.

Moschetti looked up competitive shooting and found the youth oriented 4-H sports program, where he competed for four years before winning the National Championship.

At the National Championship, Moschetti set a record for the most targets broken.

“I participated in the USA shooting competition for two years before making my first junior team,” where Moschetti has been competing for five years.

While Moschetti originally attended Lindenwood University in St. Louis on a full-ride scholarship, he transferred to UCCS two years ago after the US Olympic Training Center offered him a spot when he won a silver medal in the 2017 World Junior Championships.

“I’ve been very fortunate to have a lot of success, and now we are looking at the 2020 Olympics,” said Moschetti.

“You have to be able to mount your gun, shoot one target [a flying clay disc] that’s traveling in one direction, and then shoot another target that’s travelling in the exact opposite direction before they leave the boundaries of the field in a little under 1.2 seconds. And so once I signify that I’m ready, it’s actually a random delay between 0 and 3 seconds later that the targets emerge out of the houses that they fly from, and then I have that short little 1.18 seconds in order to complete my task,” said Moschetti about his sport.

The discs fly at 62 miles per hour, on average. Training consumes Moschetti’s time, so he only comes to campus for class and often misses class because of competitions.

“I spend more time reading textbooks than I would ever care to admit, because you end up having to teach yourself a lot of the information,” Moschetti said.

Moschetti relies on time management, professor office hours and independent learning to keep up in school while constantly training and competing.

Moschetti wakes up at 6 a.m., to be at a shooting range near Fort Carson by 8 a.m. and trains until 2 p.m. Then he goes to the Olympic Training Center to work out with a personal trainer for 90 minutes before meeting with a sports psychologist to maintain to manage his stress and practice mindfulness. He is home by 6 p.m. and in bed by 9 p.m. According to Moschetti, he almost went three months without a day off during the summer, including his time at the USA Nationals.

With such a packed schedule, Moschetti said that he takes his free time seriously. He enjoys fishing, hunting, hiking and just being outdoors with family and friends.

“I’m not very good at just sitting on the couch, in all honesty,” said Moschetti.

Despite the packed schedule, Moschetti loves his lifestyle.

Moschetti said, “I get to wake up and do what I love every day, and I’ve gotten to travel the world doing it, I’ve gotten to shoot all over Europe and Asia and the United States, and I get to represent the country that I love doing it.”