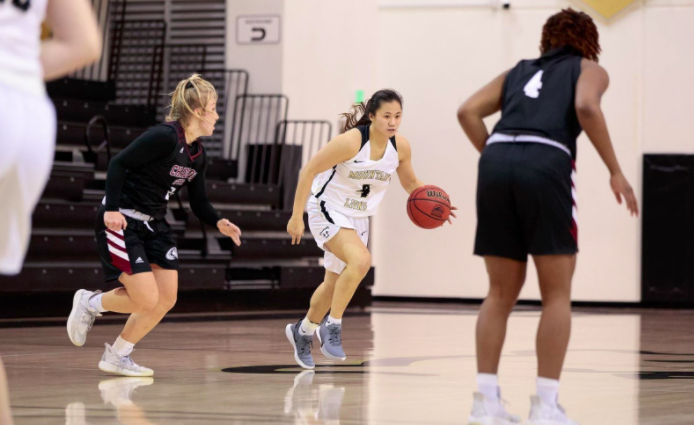 It is almost time for the UCCS Women’s Basketball team to make their return to the court and push for the postseason.

On Nov. 5, the Mountain Lions took the floor against a Division I opponent, the Wyoming Cowgirls, for an exhibition match to tip off their 2021-2022 campaign. Despite losing 39-66, the game had no effect on their record; their first official game is set to be on Friday, Nov. 12 at Midwestern State.

The Mountain Lions struggled during a COVID-19-stricken season in 2020, finishing at 5-12 in the RMAC and overall. With six canceled games, there was not an opportunity for a comeback season after starting 1-5.

The RMAC’s original preseason rankings have UCCS slated as the 11th team in the conference, tied with Adams State and Fort Lewis University, only two spots ahead of New Mexico Highlands, the lowest-ranked team in the league.

The Mountain Lions will also be without their previous year’s leading scorer, Abby Feickert, who graduated from UCCS in Spring 2021. Feickert started all 17 games last season and averaged 12.3 points per game.

UCCS will be opening their season with the most first-year players on their roster in the past decade, reaching the double digits with ten combined freshmen and redshirt freshmen suiting up this season.

Head coach Lynn Plett announced earlier in the season that the Mountain Lions had added four fresh faces to their recruiting class in late July, including three incoming transfer students and a proclaimed “dual-sport” athlete in Gracie Haneborg.

Abela helped Otero Junior College reach the Sweet 16 in the National Tournament last season, shooting 40.5% from the field and 72.4% from the free throw line, averaging 8.4 points per game, while consistently helping her team with her perimeter defense on 1.3 steals per game as well.

Megyeri, while earning her degree in sports management, appeared in 24 games at University of Nebraska-Kearney, earning her way onto the academic honor roll all three years she attended. She was formerly a member of the CSU-Pueblo Thunderwolves, helping her squad win the conference tournament and earn a berth in the NCAA Tournament.

Walker, named twice to the dean’s list at her time at CCU, appeared in all 18 games for the Cougars, notching three total starts. In those games, Walker managed 5.1 points per game and added 21 total assists and 10 total steals.

In addition to her most recent appearances in basketball, while playing at the Classical Academy, Walker was named the 2016-2017 Female Athlete of the Year, also earning the team’s Most Valuable Player award.

As an incoming freshman and graduate of North Platte High School, Haneborg competed for the UCCS Women’s Soccer team as well. In high school, Haneborg set student records on the field and the court, with single game scoring (33) and steals (13) records for the basketball team.

On the soccer pitch, Haneborg led her high school team to three district championship titles and three state tournament appearances, setting records for goals scored in a season (33) and in a single match (6).

With a full season and roster, the UCCS Women’s Basketball team has the opportunity to play a stronger season than the last one.