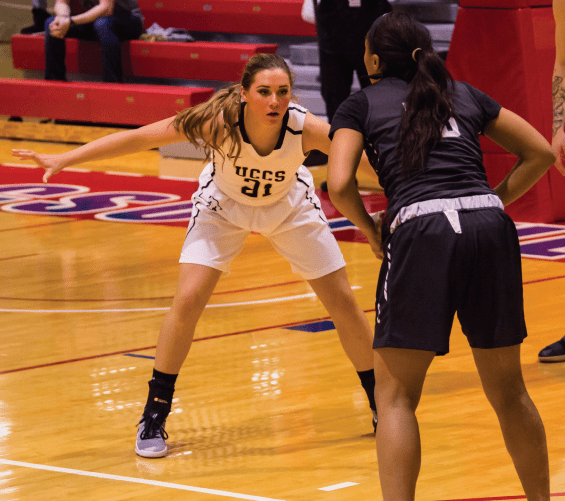 By: Gabbie Matl
In: Uncategorized

The team scored a new milestone this season, achieving their preseason goal by winning their first RMAC Tournament Championship on March 4 in a 54-37 victory against Regis University.

Aside from their talent and hard work, the team’s focus, team chemistry and strong upperclassmen leadership all helped lead the team to the championship and to victory, according to Doran.

The women had a winning mentality and a wish to finish their season strong.

“Before the game, I overheard some of the (underclassmen) saying that we need to win a ring for the seniors,” said Doran.

“The way (the team) focused on getting here, and how they maintained that focus throughout the season, I think we have to credit a lot of that to the seniors. They did a great job of keeping the team together,” said Plett.

The team had their best defensive performance of the season in the first half and held Regis to 10 percent shooting from the field. They also had eight steals and six blocks and made 15 points off of steals or turnovers.

The team’s other strength was their ability to run the floor, and play a solid and high energy game for all 40 minutes, said Plett.

“We played really good team defense. We played hard and really aggressively, and players did a good job of focusing on their assignments,” said Plett.

“We had more depth than the other team, (and) we could play everyone off the bench; everyone participated, everyone contributed and I think that made a big difference.”

Despite their relative inexperience, many underclassmen logged heavy minutes and had a huge impact on the boards; 19 points were scored by players off the bench.

Freshman forward Anna Schwecke was one of the game’s top scorers with eight points and a 100 percent shooting from the field and the free throw line. Madi Gaibler, a freshman guard, played for 26 minutes and scored six points.

Seniors Jen Vigil, Tori Fisher and Brittany Hernandez were all named to the all-tournament team. Hernandez earned Tournament Most Valuable Player after she scored 17 points and pulled down eight rebounds in the championship game.

UCCS went 23-8 in the regular season and tied for second in the RMAC standings overall. This performance earned them the third seed in the South-Central Region and an automatic bid for the first round of the 2017 NCAA Division II National Tournament.

This was the second best post-season ranking in program history.

The team played against sixth seed Eastern New Mexico University in the first round on March 10 and won with a score of 89-72. They then faced off against Angelo State University on March 11 and lost 86-81.

This is the team’s third consecutive season in the NCAA tournament.