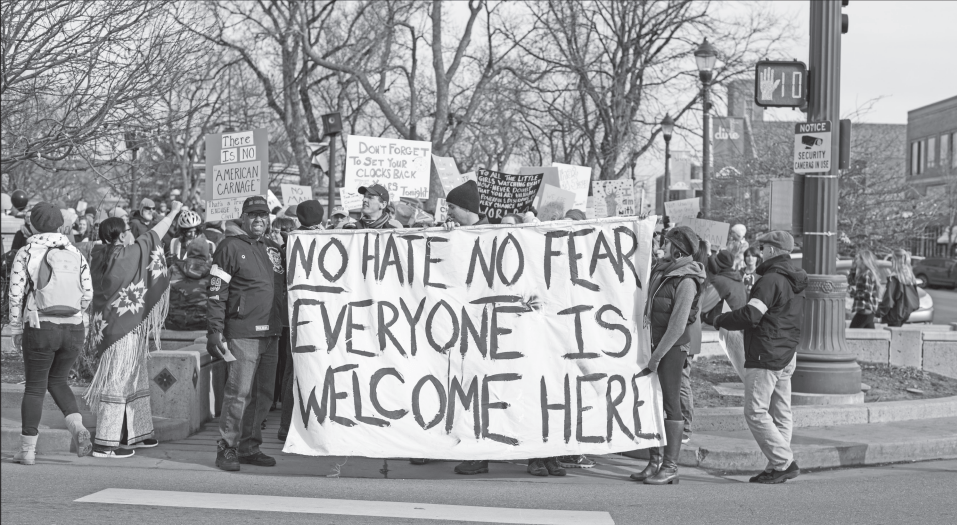 By: Mara Green
In: Features

Power to the people.

We often hear this saying then pay our attention elsewhere. But demonstrators at the Colorado Springs Women’s March embraced it fully.

On Jan. 21, thousands in Colorado Springs joined millions of others in the Women’s Marches that spanned across the U.S., Europe, Australia and other countries. Organizations including National Association for the Advancement of Colored People (NAACP) and Showing up for Racial Justice (SURJ) advertised for the march held in Acacia Park.

The Women’s March supports the idea that women’s rights are human rights, according to Olivia Romero, SURJ organizer.

“If we show up just for the equal treatment of one marginalized group, we have failed as activists,” she said.

“The Women’s March and the march in Colorado Springs were just the beginning of how we will build together in different communities around the world to resist what is to come.”

Freshman biology major Angela Escamilla was one of the participants. Escamilla attended the march because she was frustrated and disappointed with the state of the country.

“As an American, and moreover as a human being, I feel responsible for advocating for the change I wish to see,” she said. In July 2016, 56 percent of U.S. men denied the existence of sexism, and 63 percent of U.S. women believed the opposite, according to a survey conducted by the Pew Research Center.

But support from the community poured in from Colorado Springs residents. Bystanders were supportive of the march, as they honked and waved to show their support. Simple supportive acts like these were inspiring to witness, said Escamilla.

“Seeing everyone come together like this gave me a stronger feeling of empowerment and hope, not just for this community, but for this country,” she said.

Pamela Weisman, project manager of the Matrix Center for the Advancement of Social Equity and Inclusion, said she was amazed by the turnout in Colorado Springs.

“For a city that leans very conservative, it was refreshing to be surrounded by so many people who support working toward a more inclusive country,” said Weisman.

Many cities expected a smaller turnout than they saw, including Colorado Springs. According to U.S. Uncut’s numbers, Los Angeles expected 80,000 attendees, but 750,000 people attended. Chicago estimated 50,000 but brought in a range between 150,000-250,000 people.