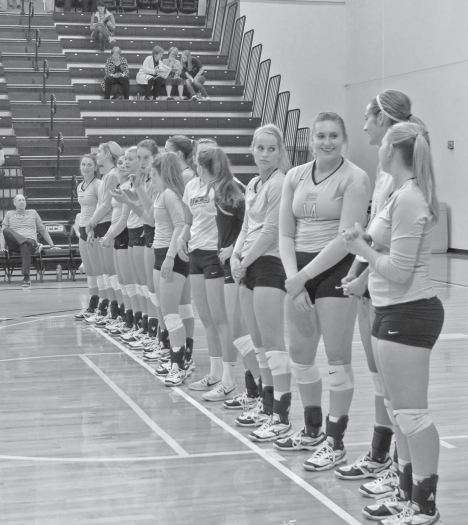 Women’s volleyball loses in semi-finals, looks back on season

By: Mikayla Nunn
In: Sports & Recreation

After beating Colorado Christian 3-2 at the RMAC Quarterfinals on Nov. 15, the women’s volleyball team had their sights set on the NCAA Division II Tournament.

The quarterfinals, the first RMAC tournament of the season, ended during the fourth set with a victory score that moved the team to the RMAC semifinals.

But on Nov. 18, the team ended their season with a loss in the RMAC semi-finals to the Colorado Mines 1-3. The team ended with a final season score of 18-10.

The season started off strong in early September with a 3-0 win against Oklahoma Panhandle State. With a total of six kills in the first game, freshman outside hitter Grace Nelson started her college volleyball career strong in the Aggie Classic.

The good start came to a close with a 0-3 loss against Fort Hayes State.

Before the season officially began, the volley ball team received honors as they were picked fifth in the RMAC Preseason coaches’ poll. Senior setter Morgan Evans was honored as well by joining their preseason team.

Before the semi-finals, the team was prepared to win against the Colorado Mines, according to head coach Chrissy Elder.

“We are really proud of how they are peaking at the end of the season. We are really jelling together as team, so that is really optimistic,” said Elder.

The victory at the quarterfinals helped the team progress after losing the RMAC quarterfinals to Metropolitan State University last year. Seven underclassmen players were on the team this year, and they accepted the challenge of maturing and bringing their best strategy, said Chrissy Elder.

“We are still really young, but they are maturing really quickly. We have grown so much every year that they have just accepted a bigger challenge than what they did last year,” said Elder.

The South Dakota games came right after the team played Colorado Mesa and won 3-2. After the game, which Elder described as the peak of the season, the girls learned how to work well together as a team, according to freshman outside hitter Taylor Smith.

“I think that it lit a fire under our girls. It was the most special game really,” said Smith.

After going 12-6 in RMAC matches, the team came third in the conference, allowing UCCS to host the event.

“Our greatest accomplishment was definitely hosting first round; it was one of our big goals,” said Smith.

Smith, an accounting major, has a total of 45 sets played this season. The team appreciates Smith’s humor and work ethic, both on and off the court, said Elder.

“She does so much for our team. Off the court, she adds a lot of humor and lightness when we need it, and on the court, she’s super feisty and is fearless,” said Elder.

“Especially as a freshman, she adds just about everything that we need for this team.”

Elder said she is proud of the team, and what they have accomplished this season.

2016-12-03
Previous Post: The Higher Learning Commission visits UCCS for accreditation review
Next Post: Teacher absence policies unfair to students; should be on an individual basis