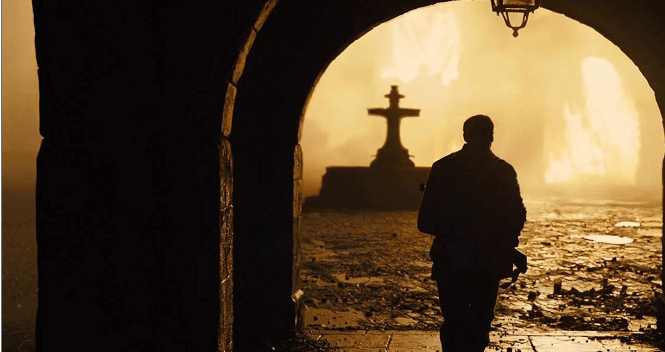 Pure, unadulterated beauty is what creates Sam Mendes’ style in his latest film, “1917.”

You’ve heard about the movie being “one shot” (it’s actually two shots, or rather it has the effect of being two shots), and that unbelievable feat sticks straight to your eyes when you sit down in the theater and challenge yourself to follow the continuous movement of the characters and war-torn French landscape on the Western Front.

World War I was gloomy and bloody, but somehow “1917” finds a way to build extravagance out of ruin. George MacKay plays Lance Corporal Will Schofield, who, along with his comrade Lance Corporal Tom Blake (Dean-Charles Chapman), sets out across the Western Front to deliver a message commanding other British soldiers to cancel their attack on the Germans.

We follow them through fields sprinkled with bodies and rats, enemy bases set with traps and towns in ruin, populated sparsely with soldiers and civilians.

Death, destruction and intense emotional struggle form the basis of this tough work of art.

While engaging from the first second, “1917” is, admittedly, slow to start and confusing to follow if you don’t have a typical interest in the events of World War I. However, the plot’s uniqueness is eventually rewarded. It’s not about the entire war, it’s not about a well-known moment like in Nolan’s “Dunkirk.” It’s a British microcosm on the big screen.

I could only find myself absolutely invested once the action started to pick up. Again, as this is not a typical film, the action is not entirely typical, either. We have guns and grenades and flaming planes flying into abandoned barns, but the most suspenseful moments come from the chase, the mere thought of our protagonists falling down and never getting back up.

“1917” didn’t win Best Picture at the Academy Awards, though it easily could have with one scene, a scene worthy of a literal jaw-drop. A small town in France, Écoust-Saint-Mein, lights up with flares in the night sky and fires around the border. You will never find a more astounding, monumental scene in all of film history.

Evidently, it only takes two long shots (again, an illusion) to create a masterpiece in cinema. Sam Mendes has the right idea.