Although enrollment has increased since 2014, hiring new faculty and staff does not occur alongside increased enrollment.

Common reasons for a faculty member to leave UCCS include retirement or resignation. With about 260 tenure track and instructors in the College of LAS, it is not unexpected to have faculty leaving, according to Peter Braza, dean of LAS college. 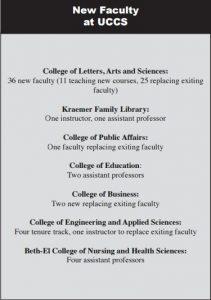 “The more graduate students they have, the better they can work and that can compete with the other colleges.”

The College of LAS generates around 63 percent of student credit hours on campus. With the increase of student enrollment over the years, new general education classes had to be added to accommodate the growing class sizes, Braza explained.

Online classes have become a popular alternative among students, said Braza. New faculty members have been hired to teach those online courses as well.

“It is also not just the enrollment we need to consider; it is also the mission of the college. For example, performing externally funded research is a large part of our mission and what allows us to continue to maintain our research accreditations. In order to do that, we need more faculty,” said Dandapani.