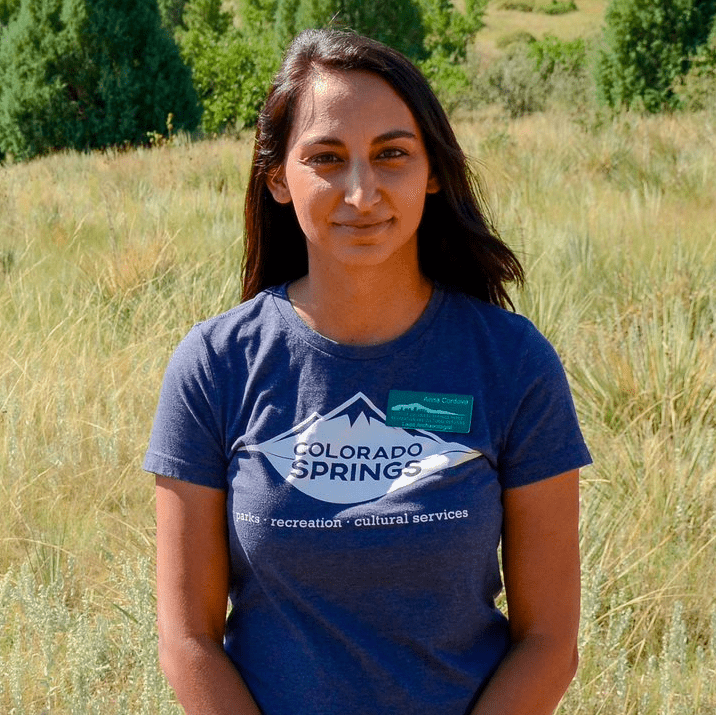 By: Frank Carber
In: Features, Voices of UCCS

You might know Anna Cordova for her many profiles in the Colorado media: her role as the Colorado Springs city archeologist or her discovery of General Palmer’s trash in the Garden of the Gods park, but before her career success, Anna was an undergraduate student with an interest in archeology.

Since the first semester she stepped on campus, Anna Cordova has excelled in her archeology work. As a freshman, Cordova took her first anthropology classes. Within her first year at UCCS, Cordova was taking part in the Department of Anthropology’s field school and was getting paid to do work that she described as a crucial juncture in furthering her career.

By the time she was a sophomore, Cordova was taking advanced classes. She credits much of her opportunities to UCCS professor Minette C. Church, with whom she has worked with since she was 19. Cordova also describes her time learning from and working with UCCS Research Associate Bill Arbogast as playing a pivotal role in her academic development.

“[Attending] UCCS as an undergraduate in particular gave me so many opportunities to further my career before I even graduated,” Cordova said.

With the support of the Anthropology Department, Cordova built a foundation of success for her future in archeology. After graduating from UCCS, Anna worked in New Mexico and Hawaii. She spent her time in Hawaii conducting ethnographic research with Indigenous Hawaiians. Cordova studied the effectiveness of state regulations and laws to protect Indigenous rights. She then returned to use her research as part of her master’s degree in geography and environmental studies at UCCS.

Cordova’s work in Hawaii was a case study for her research on the effectiveness of laws put in place to protect Indigenous voices. Her academic work reflects the way she approaches her professional work as well.

Now, as the resident city archeologist, Cordova prioritizes fostering a relationship with tribes and Native Americans.

“Some of my favorites [projects] are the ones where I get to do tribal consultation and get their opinion on what we do with the artifacts and how we interpret it and tell the public about it,” Cordova said.

According to Cordova, archeology has been colonialist and paternalistic toward Indigenous Americans, but Cordova thinks that is turning a corner now and said that since she began working with the city, the Parks and Recreation Department has been receptive.

“I think the city’s main objective and one of the main reasons they hired me was the stewardship of our properties. That includes stewardship of sacred sites and things that are important to Native Americans,” she said.

Although Cordova has only been the city archeologist for three years, she has already made a notable discovery. In 2016, Cordova found two large dump sites from the 1870s through the 1910s that belonged to General William Palmer, the founder of Colorado Springs. Cordova worked with different agencies to complete the project. She described this experience as both her biggest challenge and biggest learning experience.

“I am still working out all different kinds of details of how to be more efficient at my job and how to be a good steward and how to conduct the tribe consultations that need to be done,” Cordova said.

For the future, Cordova believes that that there is plenty of room for growth in her work and is happy with her job. With a focus on her field work, Cordova has taken on the task of knowing what kind of

cultural and archeological resources Colorado Springs has on its land. Cordova said her main goal right now is to grow in this position as the city archeologist.

“I work in the city I was raised in, and I have really strong connections to the places I am working at. I tell people all the time that I can’t believe they are paying me,” Cordova said.