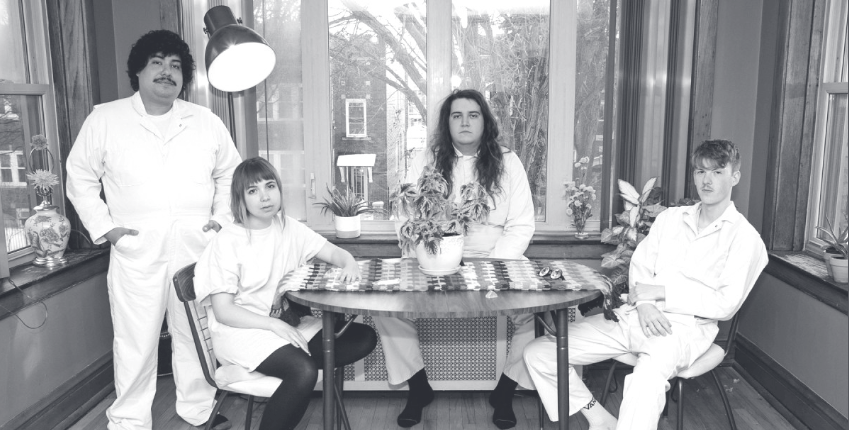 By: Julia Jackson
In: Features, Music

If you are familiar with TikTok, you may have heard Beach Bunny’s “Prom Queen,” the song that brought the indie pop band to relevance almost overnight in spring 2019.

The single from the EP of the same name helps characterize the themes of their music: struggles with self-worth and interpersonal interaction, wrapped in a coat of sugary pop instrumentals.

On Feb. 14, Beach Bunny released their debut album, “Honeymoon,” and kicked off their US tour.

The band is made up of lead singer and songwriter Lili Trifilio, guitarist Matt Henkels, bassist Anthony Vaccaro and drummer Jon Alvarado.

Students who attended UCCS’ Concert on the Lawn last semester will remember Beach Bunny’s appearance as the closing act of the night.

Trifilio performed solo, acoustic versions of songs from the four EPs she had released at the time. Her first album makes it clear that, although she has grown as an artist, the core messages of her music remain the same and with good reason. Like the “Prom Queen” EP, “Honeymoon” is an externalization of issues many of us have faced.

The album opens with “Promises,” an upbeat track revolving around the conflicting feelings of longing and bitterness in a breakup.

“Part of me still wants you, part of me wants to fall asleep,” sings Trifilio, with a wistful desperation underscored by a frenzy of instrumentation throughout the chorus.

The most interesting acoustic rhythms shine between the verses in “Colorblind,” building to a final chorus of layered vocals as Trifilio is torn between hope and the despair of recognizing a pattern of conflict in a relationship.

“Rearview” stands out as the album’s emotional core, encapsulating the helplessness of not being enough for someone you care about deeply. The track is instrumentally bare until the end, allowing Trifilio’s vulnerability to seep through the lyrics and providing a stark contrast to the sudden, loud outro where she yells, “I’m sorry, I’m trying / I hate it when you catch me crying.”

“Dream Boy,” by contrast, is one of the catchiest songs on the album. The lead single released on Oct. 31 showcases the vibrance of summer, and all the energy of new or rekindled desire.

While the album risks becoming cliche in its treatment of love and heartbreak, Beach Bunny presents a fresh angle looking through the underbelly of anxiety that permeates many spiraling relationships. Despite some formulaic musical repetitiveness in the interplay of vocals and instrumentals, the heartbeat-pounding synchronicity of the drums and the catchy guitar lines under Trifilio’s heartfelt singing form a unity that strongly supports the band’s take on a much-covered subject.

Above all, Trifilio’s candid, soul-baring lyrics lend legitimacy to “Honeymoon” as a thoroughly relatable album about love.

The high-energy, emotional intimacy of her voice creates a perfect blend of the surface-level fun of pop and the bleeding heart-on-the-sleeve approach of indie rock.

Beach Bunny is a band to keep an eye on in the next few years. Whether or not another one of their songs becomes a viral hit, they are bound to make a splash in the music scene.

2020-03-30
Previous Post: ‘To All the Boys: PS I Still Love You’ is an unrealistic depiction of young love
Next Post: ‘Birds of Prey’ fails to take flight