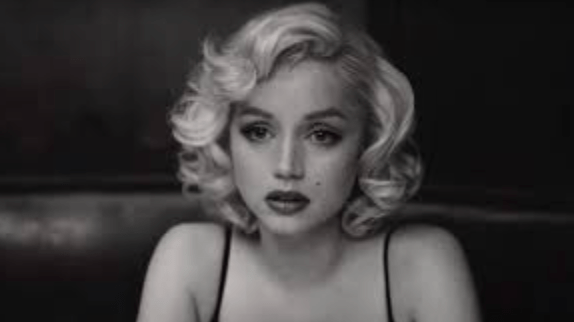 Gentlemen may prefer blondes, but the same can’t be said for “Blonde,” a film that retells Marilyn Monroe’s life with a huge helping of fiction.

Directed by Andrew Dominik and starring Ana De Armas in the titular role, “Blonde” portrays the abuses, victimization and tattered legacy of the 1950s sex symbol … kind of.

Receiving less than stellar reviews and drawing more criticism than praise since its release on Sept. 16, “Blonde” attempts to create an alternate universe where a near-fictional Monroe exists. While the film is based on a novel of the same name — which the author has said is no way a reflection of the real Monroe — it uses staggering acting and flashy camera work, switching between black-and-white and color, to cover up a thin storyline and arbitrarily harsh visuals.

Being the first Netflix film to get an NC-17 rating, the film makes its point clear from the very beginning. A young Norma Jean (later known as Marilyn Monroe) is shown with her mentally ill and alcoholic mother, who drives her into a wildfire and later attempts to drown her in a bathtub.

What follows is nonetheless stunning and extremely hard to watch. Monroe endures rape, physical abuse and abortions, only some of which reflect her real life.

All of this is accompanied by many instances of Monroe in some state of undress. Though Monroe was considered a sex symbol, the insane amount of nudity makes the audience wonder what De Armas thought of these scenes.

Although De Armas has said that she felt comfortable when filming, watching this level of sexualization is nonetheless difficult.

The harsh scenes are indeed hard to watch, but it would be a disservice to ignore De Armas’ powerful performance. She manages to nail Monroe’s infamous breathy voice as well as the charm that made her so popular. However, her performance doesn’t make up for the flat storyline and lack of validity.

The story of “Blonde” is simply all over the place. It seems the director and writer didn’t know what to focus on even though the film’s runtime is a hefty 2 hours and 46 minutes. Instead, the film got replaced with a variety of scenes that really had no cohesive agent to bind them all together. Thus, the audience has really only one connection to the characters, and that one connection is Monroe. The other characters — who include American legends such as John F. Kennedy, Joe DiMaggio and Arthur Miller — largely fall flat even though they are played by A-list actors.

As a Marilyn Monroe fan, it was heartbreaking to see the film only focus on the unfavorable and fictional parts of her legacy, as it felt like the film would be a testament. Rather we are drowned by her drug abuse, fake daddy issues, largely untrue sexual exploitation and loneliness instead of seeing the true Monroe who was an intelligent, dedicated and charming actress and comedian.

While it is true that Monroe led an estranged life plagued by drug abuse and health issues, we shouldn’t use her pain to create entertainment or art that mythologizes her suffering.

2022-10-11
Previous Post: OPINION | Accommodation-based parking should be more available to students who need it
Next Post: Dahmer series misses the mark, exploring the killer instead of social message