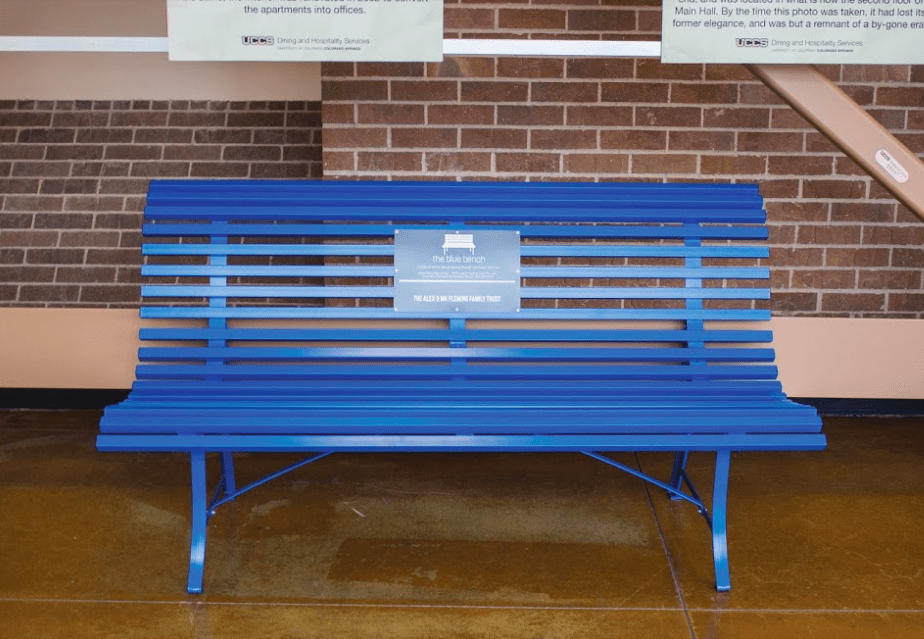 By: Aspen Harris
In: Features

Next to Sanatorium Grounds, a blue bench serves as a symbol of sexual violence prevention.

Tom Dewar, senior director of Development for University Advancement, worked with Alex during a fundraiser for veterans and introduced him to the UCCS campus a year ago.

Alex wanted to honor Mary-Katherine through donating the bench and prevent others from enduring sexual assault, according to Dewar.

“It makes me feel good about Alex that he did this to honor his wife. It’s a neat gesture,” says Dewar.
According to Dewar, the purpose of the bench is to be a physical symbol that sparks a conversation about sexual assault.
“When something traumatic like this happens, everyone focuses on the bad guy, while the victim is lost in the shuffle. The purpose of the Blue Bench is to reach out to those victims and provide a safe place for them,” said Dewar.

A new plaque was recently added to the bench with local Colorado Springs resources for those who have endured any kind of traumatic sexual assault.
The plaque is meant to stand out enough for people to see it while they’re getting coffee, so they don’t have to feel obligated to approach the bench in public.
“I applaud folks who have overcome this trauma and are able to stand up and talk about it to others, but the Blue Bench provides a number of resources to reach out to for those who don’t want the public to know,” he said.
The bench was originally meant to be mounted outside, but UCCS decided to make it mobile, so it is easy to move around campus in order to allow as many people to see it as possible.