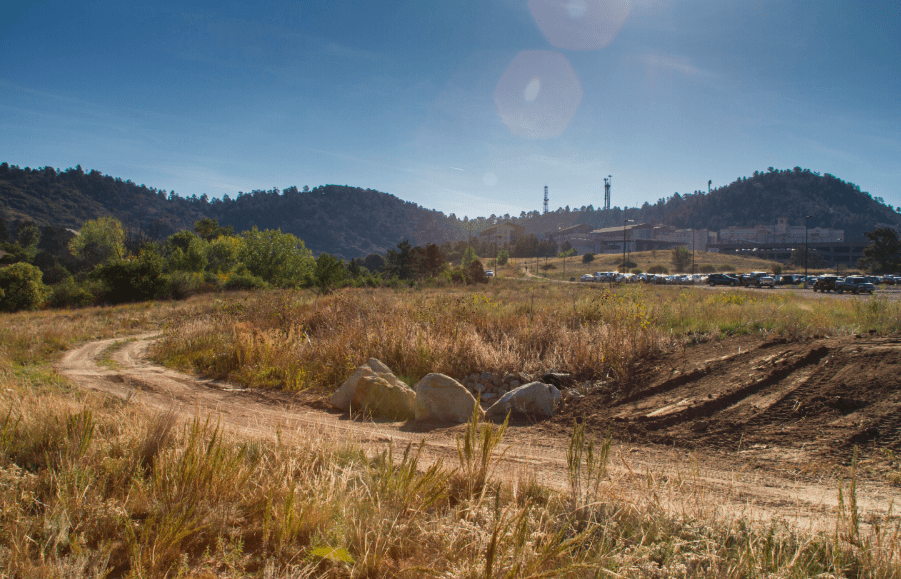 As the Sports Medicine Center’s groundbreaking approaches, more improvements are planned for the campus including an alternate route to replace the gated Stanton Road.

The Sports Medicine Complex is the most concrete action UCCS is taking to improve campus, but more projects are being developed according to Carolyn Fox, the Executive Director of Planning, Design and Construction.

Fox said that the next improvement will be a road connecting the Stanton roundabout near the Roaring Fork Dining Hall and the Eagle Rock roundabout next to the Ent Center.

The road will be built with help from the city of Colorado Springs as the city shares the cost of the road, according to Fox. The road will allow students, staff, faculty and shuttles to avoid the traffic on Austin Bluffs Boulevard and North Nevada Avenue.

According to Fox, the road will better serve students because it will avoid traffic and avoid three traffic lights. The team that evaluates what is needed to help select a design firm for the road has already been out to scout the area. She said the road should be ready in time for the fall 2019 semester.

The William J. Hybl Sports Medicine and Performance Center will integrate education and sports medicine through classes and a clinic run jointly by UCCS and Penrose-St. Francis according to Fox.

“It’s a really interesting building combining the clinical, and the treatment of patients with our academic side,” said Fox.

The Sports Medicine Center is part of the city of Colorado Springs’ projected titled City for Champions, according to the projects website. The four projects are meant to improve regional tourism, also including an Olympic museum, sports and event center, and a visitor center for the United States Air Force Academy.

The City for Champions project was submitted as a whole, with each part of the project being outlined, according to Fox.

Expanding campus can be a challenge due to its geographic location.

“The bluffs definitely are a challenge,” said Fox. “There are definitely areas of property that we own that we can never build on because of the bluffs.”

Fox said that with the current number of students on campus that housing, parking, dining and classroom needs are currently being met. According to Fox, there is a demand to build more offices and to move the nursing school into the Health and Wellness Quad.

Renovation plans are being developed for the engineering building as well.

“It’s dated, especially in its laboratory areas, which were set up for microtechnology, but of course we’re at nanotechnology, so we’re out of date here,” said Fox. “We’re looking for ways to fund this renovation.”

Since 2012, UCCS has expanded the Gallogly Recreation and Wellness Center, built the Copper and Eldora houses, built Alpine Village and built the Ent Center for the Arts, according to Fox. The projects  were outlined in the UCCS Master Plan, which outlines all campus improvement plans.