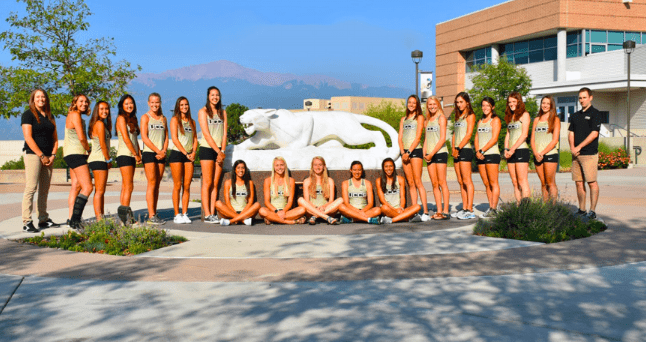 Lady Mountain Lions run with the best at Roy Griak

Last week, the Women’s Cross-Country team rested all but two runners after seizing third place at the 33rd annual Roy Griak Invitational, hosted on Sept. 29 by the University of Minnesota.

There, the Mountain Lions ran against 22 rival teams, claiming third with a score of 89 points.

The field consisted of 412 runners, of which Kayla Wooten, UCCS’ top runner and two-time U.S. Track and Field and Cross-Country Coaches Association (USTFCCCA) Athlete of the Week, was the victor by less than two seconds.

Hanna Ellis took the No. 7 spot and finished as the top freshman in the field, beating the University of Mary’s Taylor Hestekin by just three tenths of a second.

“It was super exciting,” Ellis said of that weekend, “to be able to travel with the team for the first time.”

Ellis also said she is “looking forward to how the championship season is going to go, since [they are] doing really well early on.”

Corey Kubatzky, Head Coach of the Lady Mountain Lions, shared Ellis’ sentiments in an interview, adding that it was good to be home after a weekend of long travel.

“We took a risk going into a big meet like that early in the season,” he said, speaking of 2018 Roy Griak Invitational.

“You don’t usually have one of those days where everyone has a good day,” Kubatzky said of the team’s overall performance. “It shows what we’re capable of,” when everyone is healthy and competing at their best.

Prior to Roy Griak, the Lady Mountain Lions only appeared in two events, those being the UCCS Rust Buster and the Colorado College Invitational on September 1 and 8, respectively. At the Rust Buster, the team faced only four opponents. At Colorado College, they faced only six, far from the field of 22 teams that appeared at Roy Griak.

“We’re in a really good spot,” Kubatzky said, as the Mountain Lions are injury-free and are currently battling no major illnesses.

Prior to the Roy Griak Invitational, the Mountain Lions were ranked No. 15 in the nation, according to the USATFCCCA. After the meet, the USATFCCCA announced its Week 3 poll, putting the team in the No. 9 spot. They are now one of four Rocky Mountain Athletic Conference (RMAC) teams ranked in the top ten, with Adams State sitting at No. 1. They were also ranked No. 4 in last week’s USTFCCCA South Central regional poll.

2018-10-09
Previous Post: Campus improvements underway; new route replacing Stanton Road in the works
Next Post: Men’s Golf up to a Slow Start, preview on the Way