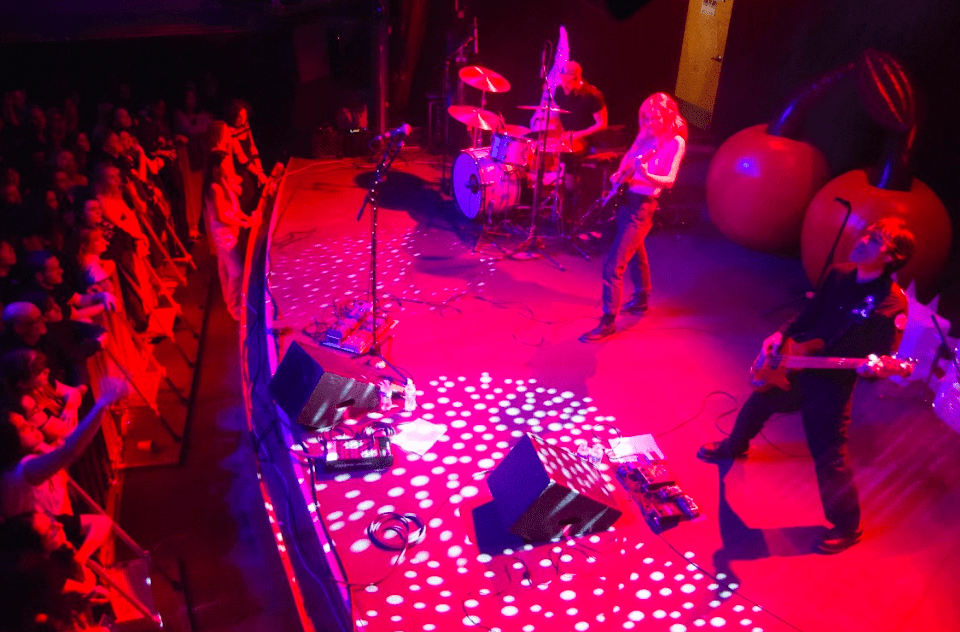 Cherry Glazerr stops by the Gothic Theatre to play a piercing, loud performance

March 1 was a cold night in front of the Gothic Theater in Denver. Three front women bands, two of them worthy of a review, took the stage and warmed up the inside of the venue instantly.

The theme of the night was most serenely embracing the unusual occurrence of seeing three female front musicians rock the stage.

Cherry Glazerr, Palehound and The Corner Girls are all from three different cities, but ended up making history in what could be the first all female lineup of the year in Colorado.

Denver’s own pastel punk band The Corner Girls play simplistic punk-rock music that is heavy on bare chord variations and meticulous on their pentatonic riffs.

The three did exactly what they were supposed to do as an opener that night – pump up the crowd.

Songs like “ “Cellphone” and “Exed Out” magnify the point that the three piece aren’t afraid to sing about their feminine interests as it pertains to girls getting free drinks at bars and boys who try to act artsy on Instagram.

An initially cold reaction from the crowd ended in a roar of applause once the 30-minute set was over.

Nothing too complex to over think at The Corner Girls set on Friday, just good catchy rock music that was made for a house party in the suburbs of Denver.

The next act was a band called Palehound from Boston. The three musicians played a much longer set that evoked a more mellow sober sound than anticipated from a band playing before Cherry Glazerr.

The first song that the band opened with was called “If You Met Her,” which was by far the most energetic song of their 40-minute set.

By this time the venue was packed of teens, adults and in-betweens when a dark room turned darker when the emo rock band with went into the quietest song yet called “Killer.”

“This song is my favorite song to play live, it’s a song about killing your local rapist,” said lead guitar and vocalist Ellen Kempner.

The LA grunge rock band Cherry Glazerr had an extraordinary set Friday night filled with dancing, piercing-loud guitars and a drummer that made the three-piece sound like a four.

Two inflatable red cherries blew up behind the band, front woman Clementine Creevy took the stage and the show was off and running.

In the spirit of grunge rock, Cherry Glazerr engaged in little to no small talk with the audience and immediately kicked the show off with the song “Ohio,” “Had Ten Dollaz” and “That’s Not My Real Life.”

Self-aware lyrics and a specific strain of anger attached to all of Cherry Glazerr’s songs gave attendees enough momentum to form rowdy mosh pits. If it were not for the barrier in front of the stage to give photographers enough room to do their job, stage diving would’ve occurred as well.

“The reason why I hate you is because I see me in you,” Creevy sang in the song “Stupid Fish.”

Cherry Glazerr is just as entertaining to watch as they are to listen to. It comes as no surprise that Creevy is not only a musician but also an actress, flailing around on stage like a used car inflatable man while stealing signature rock moves from Kurt Cobain.

After roughly an hour worth of material, Cherry Glazerr made the cheesy and predictable behavior of an encore exciting again, by playing a cover of LCD Soundsystem’s “Time to Get Away.” A great rendition of a timeless song.